The blog Stranger Fruit, written by an evolutionary biologist and historian of biology John M. Lynch, recently featured an excerpt from the introduction that he has written for the new edition of Sir Arthur Conan Doyle's The Coming of the Fairies 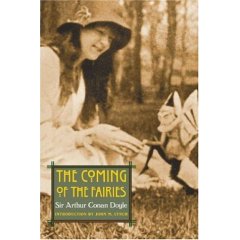 In November 1920, the celebrated author Sir Arthur Conan Doyle announced the beginning of a new "epoch in human thought." He believed that he was presenting "a strong prima-facie case" for the existence of fairies, based on photographs taken by two pseudonymous young girls in July and September 1917. Noting that "in a matter involving so tremendous a new departure one needs overpowering evidence before one can say that there is no conceivable loophole for error," he laid out the case for the existence of fairies in the village of Cottingley, Yorkshire. Some have seen this announcement in The Strand Magazine and Doyle's subsequent book, The Coming of the Fairies, as the writings of a sixty-one year old who was losing his ability to think rationally. But to truly understand why the creator of Sherlock Holmes, one of the most unsentimental and logical characters in literature, would believe in fairies requires an understanding of Doyle's life, his general acceptance of Spiritualism, and what he felt would be the result of widespread recognition of the Cottingley photos.

And another entry on Torchwood.TV delves into it as well, mentioning Harry Houdini in the process. For background information on the Cottingly fairies, you might consider reading this link.
11/15/2006 06:00:00 PM
blog, books