One of the benefits of being a Baker Street Irregular is the ability to "go everywhere, see everything and overhear everyone." As such, I generally find out about a variety of events, books and multimedia items of Sherlockian nature.

Through the generosity of Fred Shapiro and his publishers at the Yale University Press, I recently received a copy of his new work The Yale Book of Quotations. As you no doubt can tell from each entry on this blog, I'm a fan of quotations. In fact, a reader sent me an email a few weeks back expressing admiration for my habit of using a Canonical quotation as the headline for each blog post. 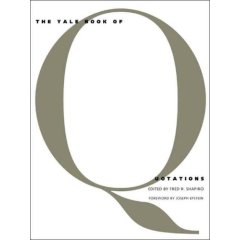 Shapiro's contribution to the area traditionally dominated by Bartlett's

is that it is the first major quotation book to emphasize modern sources and the first quotation book of any sort to use state-of-the-art research methods to comprehensively collect famous quotations and to trace quotations to their accurate origins.

But he also does Sherlockians a great service. There are 39 quotations attributed to Sir Arthur Conan Doyle, largely from the Canon. We also hear from Anthony Boucher, one half of the Boucher-Green writing team for the Sherlock Holmes radio series in the 1940s. And the founder of the Baker Street Irregulars, Christopher Morley, makes an appearance with four quotes.

Clever readers will also be able to enjoy quotations from members of the Algonquin Round Table, such as Heywood Broun, Edna Ferber, George F. Kaufman, Robert E. Sherwood and others like:
The Yale Book of Quotations contains literally thousands of other quotations which span from traditional historical and literary sources to more modern areas such as advertising slogans, radio and television catchphrases, proverbs, film lines and nursery rhymes. And Shapiro has gone the extra distance of clearing up improperly attributed quotes - some you didn't even know were wrong. It was Napoleon Bonaparte, not William Tecumseh Sherman who said "War is hell!"

This is really a unique find and it's certainly easy for anyone to browse. In addition, there is a keyword index, in case you're looking for a certain quotation to fill a void, and there are plenty of annotations and cross-references that make this more than simply a reference book.
11/04/2006 01:01:00 AM
blog, books