I'm not usually a pastiche kind of a guy. I've managed to enjoy Nicholas Meyers' The Seven Percent Solution

and both The Revenge of Moriarty

and Return Of Moriarty

by John Gardner, but that's about the extent of it.

I was just informed of a set of stories first released in 2003 that has recently been revised and expanded. I refer to The Singular Adventures of Mr Sherlock Holmes

by Alan Stockwell. While the titles of the (oh-so-Canonical number of 17) stories can be a little off-putting - "The Sulky Pony," "The Bride of the Moon," and "The Blue Silk Underwear" to name a few - evidently, the plots themselves are quite workmanlike in their construct.

From Mr. Stockwell's Web site, I found two very worthwhile recommendations. One from David Stuart Davies: "What makes the tales so enjoyable is the ingenuity of the plots: they are engagingly inventive."

And another from Roger Johnson, one of our regular readers and commenters, noted "The style is a simulacrum of Dr Watson’s, and Mr Stockwell clearly knows his period and his Canon."

While I can't comment on having read the stories myself, I'm more inclined to purchase this pastiche than any other. 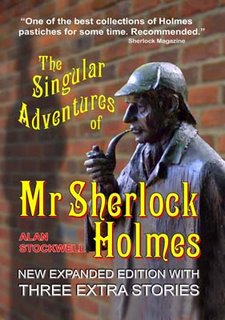