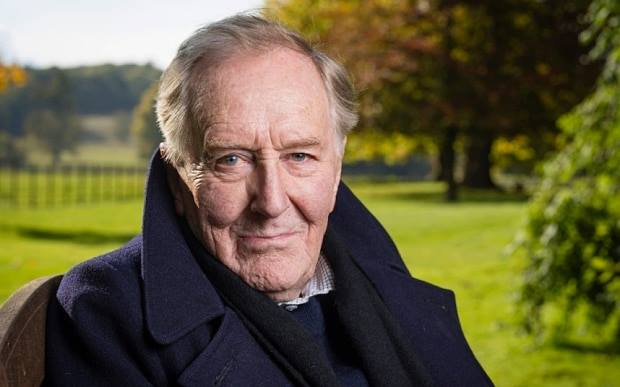 Multifaceted character actor Robert Hardy has died at the age of 91. He was recognizable to generations of fans from the popular roles he played on television and screen. And of course, Sherlockians have their own reasons for remembering him.

Timothy Sydney Robert Hardy was born in the Cotswolds in 1925 and got his start on the stage with the troupe that would eventually become the Royal Shakespeare Company. His roles ranged from historical figures, to nobility, politicians, villains and more. While his early career was mostly stage work, Among Hardy's first major off stage work was a television series adaptation of David Copperfield, in which he played the title role in 1956.

But looking back on his 70-year career, there were three roles which gained him the most fame. The first was as veterinarian Siegried Farnon in 90 episodes of All Creatures Great and Small from 1978-1990. The series was based on the books by James Herriot, the pseudonym of veterinarian Alf Wight. The second was his portrayals of Winston Churchill. Hardy portrayed the irascible and inveterate politician in five separate movies and three stage productions, beginning with the miniseries Winston Churchill: The Wilderness Years in 1981. He prepared for his role by listening to numerous audio recordings of Churchill's speeches. Finally, modern audiences got to know Hardy from a role he took up in his late seventies: that of Cornelius Fudge, the bewildered Minister of Magic in four Harry Potter movies.

But one role along the way led to a lifelong passion that inspired Hardy to pen two books. Inspired by his portrayal of Henry V in the play of the same name, Hardy took to the longbow and later wrote the definitive book on its history: Longbow: A Social and Military History (1976). He co-authored a follow-up volume in 2004, The Great Warbow: From Hastings to the Mary Rose.


"His voice was as smooth and suave as his countenance" [CHAS]

Your editor first had the pleasure of experiencing Hardy in a medium about Sherlock Holmes via an audio cassette (remember those?), and it was in the medium of audio that first brought Hardy into a Canonical role.

In 1970-71, Hardy took up the role of Sherlock Holmes opposite Nigel Stock for a set of LP recordings. [Audiences will of course remember Stock for his role as Watson opposite Douglas Wilmer and Peter Cushing in the BBC television series in the 1960s.] The four-record set contained eight stories and was issued by the Discourses label. They were:

Update: Nick Utechin tells us there was a sixth volume, called the Return of Sherlock Holmes, consisting of EMPT, SOLI, REDC, MAZA. These stories are quite elusive online; we haven't been able to locate them anywhere.

[For the key to the story abbreviations, click here.]

Hardy's reading is easy on the ears and conveys every element of the stories as Conan Doyle wrote them, with Hardy giving the words their due. Our favorite among this set is his reading of "Charles Augustus Milverton," in which the smarmy, vile blackmailer scolds the detective with a smooth, "Mr. Holmes, Mr. Hoooooolmes..." and concludes with Milverton's late night visitor shouting as she delivers the final justice, "Take THAT! And THAT! And THAT! And THAT!" It's a delight to listeners' ears to hear Robert Hardy take up each of these cases.

We have to believe that it is these recordings that led the producer's of the Granada Sherlock Holmes series with Jeremy Brett to consider Hardy for the role of Charles Augustus Milverton in their version of the story, the two-hour film The Master Blackmailer. Without a doubt, Hardy simply looked the part of Milverton, who was described by Watson as having


"a large, intellectual head, a round, plump, hairless face, a perpetual frozen smile, and two keen gray eyes, which gleamed brightly from behind broad, golden-rimmed glasses. There was something of Mr. Pickwick's benevolence in his appearance, marred only by the insincerity of the fixed smile and by the hard glitter of those restless and penetrating eyes. His voice was as smooth and suave as his countenance, as he advanced with a plump little hand extended, murmuring his regret for having missed us at his first visit."

His portrayal of one of the worst men in London made Milverton's eventual demise a welcome conclusion. But some reviewers thought that the production—a two-hour film for the shortest story in the Canon—was a bit of overkill. 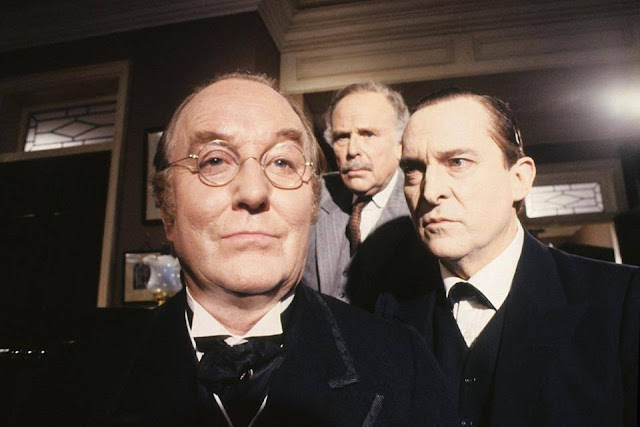 There is much more to Robert Hardy's life and career than we were able to convey here. And thankfully much of his work remains in various formats for all to enjoy. For those able to discover and purchase his audio interpretations—whether it's his readings of Sherlock Holmes, Rumpole or the Aubrey-Maturin series—Hardy's voice gives new life to old works.