"I had a chat with him on eclipses" [STUD] 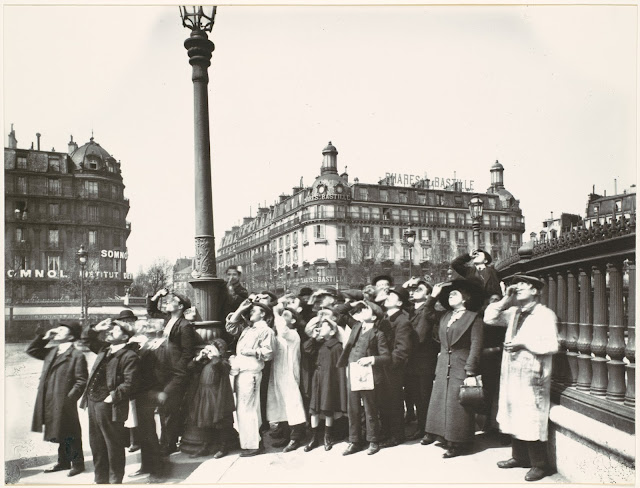 Sherlock Holmes was famously interested in only those things that mattered to his profession. Recall that in A Study in Scarlet, Watson made up a list titled "Sherlock Holmes - His Limits." The list consisted of the following:
Specifically regarding astronomy, the conversation went something like this:


My surprise reached a climax, however, when I found incidentally that he was ignorant of the Copernican Theory and of the composition of the Solar System. That any civilized human being in this nineteenth century should not be aware that the earth travelled round the sun appeared to be to me such an extraordinary fact that I could hardly realize it.
"You appear to be astonished," he said, smiling at my expression of surprise. "Now that I do know it I shall do my best to forget it."
"But the Solar System!" I protested.
...
"What the deuce is it to me?" he interrupted impatiently; "you say that we go round the sun. If we went round the moon it would not make a pennyworth of difference to me or to my work."

So it may seem odd that today, with the Solar Eclipse mania at its height, we should bring Sherlock Holmes into the astronomical conversations. But, as always, there is a method to our madness.

While Holmes himself may not have been conversant in the workings of the Solar System, there were those around him who were. Particularly his arch-nemesis Professor Moriarty, who famously wrote a treatise on The Dynamics of an Asteroid.

In The Valley of Fear, Inspector MacDonald recounted his visit to Moriarty and how Moriarty educated him on eclipses:


"Man, you can't but recognize it. After I heard your view, I made it my business to see him. I had a chat with him on eclipses - how the talk got that way I canna think - but he had out a reflector lantern and a globe and made it all clear in a minute.

But it was in "The Greek Interpreter," where we see that Holmes did in fact know a bit more than he initially let on:


It was after tea on a summer evening, and the conversation, which had roamed in a desultory, spasmodic fashion from golf clubs to the causes of the change in the obliquity of the ecliptic, came round at last to the question of atavism and hereditary aptitudes.


The obliquity of the ecliptic has nothing to do with eclipses per se, but is essentially "the angle of inclination of the Earth's equator with respect to the plane of its orbit, which to us, produces the apparent relative tilt of the Earth's polar axis which causes the annual seasons." So Holmes was aware of the Earth and its general properties.

It's also worth noting that words related to eclipse did manage to work their way into the Canon in other places, albeit less scientifically:

In "A Scandal in Bohemia," Watson related how deeply Irene Adler impressed Holmes, such that she blotted out anyone who might compete with her, as she "eclipses and predominates the whole of her sex."


"The Noble Bachelor" opens with an admission that there have been greater disgraces in the social sphere:


"The Lord St Simon marriage, and its curious termination, have long since ceased to be a subject of interest in those exalted circles in which the unfortunate bridegroom moves. Fresh scandals have eclipsed it, and their more piquant details have drawn the gossips away from this four-year-old drama."

And in the conclusion of "The Disappearance of Lady Frances Carfax," it's used as an admission that Holmes sometimes suffered from myopia in his thinking:

"Should you care to add the case to your annals, my dear Watson," said Holmes that evening, "it can only be as an example of that temporary eclipse to which even the best-balanced mind may be exposed. Such slips are common to all mortals, and the greatest is he who can recognize and repair them.


Holmes himself may not have been familiar with interstellar activities, but he was no stranger to the wider use of the phrase.