Sherlock Holmes & the Green Lama: The Heir Apparent - A Review

"an inheritance with a vengeance" [HOUN] 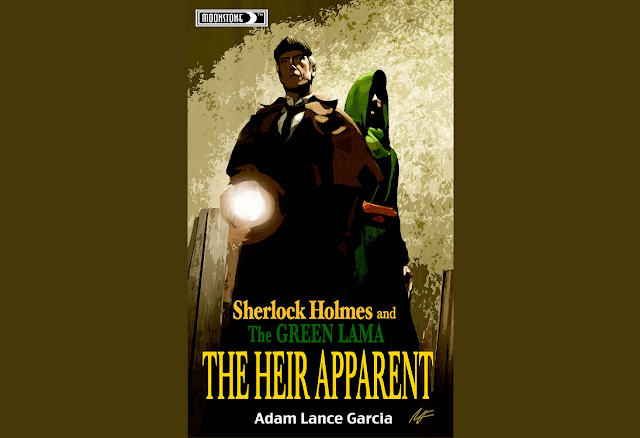 But Adam Lance Garcia's Sherlock Holmes & the Green Lama: The Heir Apparent not only succeeds in combining two disparate characters, he manages to channel the spirit of Conan Doyle within the context of a more modern character.

Published by Moonstone Books, The Heir Apparent takes place within the Green Lama "universe," but does not require prior knowledge of the character. In short, the story takes the form of a "lost" document by Jethro Dumont, the secret identity of the Green Lama. He serves as our honorary Watson, relating a tale that takes place in the latter part of Holmes's career involving kidnappings, death, and one person's quest for vengeance. It's a brisk, brief tale that balances the extraordinary spirit of classic pulp tales with the breathless atmospherics of Conan Doyle's canon.

In short, if you are seeking a straightforward Holmes pastiche, The Heir Apparent doesn't fit the bill....but transcends it. Adam Lance Garcia does the near impossible: he channels Conan Doyle's prose style while telling a more modern, streamlined pulp action tale. In short, it feels like Conan Doyle ghostwriting a pulp story involving Sherlock Holmes yet keeping it firmly within the bounds of traditional Holmesian storytelling.

Many great Holmesian pastiches are available for your reading pleasure, but Adam Lance Garcia's The Green Lama/Sherlock Holmes: The Heir Apparent is not just another pastiche; it's a seamless blending of two disparate styles that make for a uniquely engaging tale. Whether you are looking for traditional Holmesian fare or a slightly more modernized equivalent, The Heir Apparent provides plenty to entertain Sherlockians of both types.

This is one book to place on your Sherlock Holmes must-read list.

(A complimentary electronic copy was provided for purposes of review)