What Was in Sherlock Holmes's Everyday Carry? Part 2

"transfixed by a jack-knife" [MUSG] 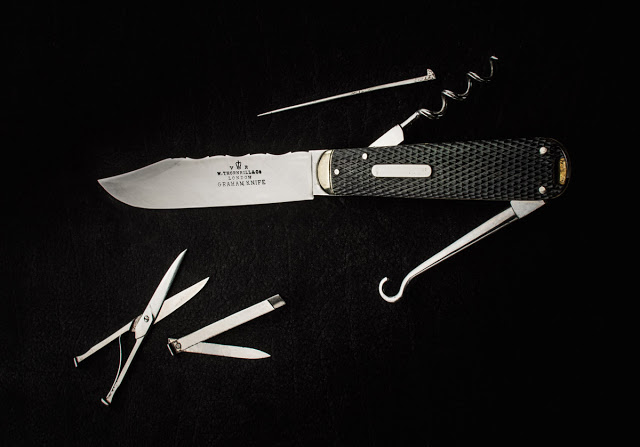 In the first installment of this feature, we began our investigation into the everyday carry habits of Mr. Sherlock Holmes.Having verified his use of the pocket notebook and pencil, the portable light source, and the compact fire kit, we continue with our examination of the great detective’s pocket knife.

With his knife, Holmes performs tasks as delicate as collecting samples of exotic poisons and as robust as assailing iron-barred shutters. If the same knife is used for both tasks, we may surmise that it has more than one blade. Such a knife would align with the thinking of leading outdoor writers of Holmes’s day like Horace Kephart, who favored large jack-knives with two to three blades of varying sizes and shapes, the smallest of which, according to his Camping and Woodcraft (1916), should be kept sharp and clean “for such surgery as you may have to perform.” (Needs must when the Devil drives.) For my part, I could be content with a four-inch spear- or clip-point main blade accompanied by a two-inch sheep-foot or Wharncliffe secondary blade.

We might infer a few more features of Holmes’s knife. Take, for example, this much-debated passage from “The Abbey Grange”:


“This bottle was opened by a pocket-screw, probably contained in a knife, and not more than an inch and a half long…. When you catch this fellow you will find that he has one of these multiplex knives in his possession.”


One of “these” multiplex knives, not one of “those” multiplex knives: does the phrasing indicate that Holmes has drawn an example of such a knife from his own pocket while speaking? Perhaps a visit to Dartmoor will prove instructive...

The Man on the Tor, or, Camping with Sherlock Holmes

In the eleventh chapter of The Hound of the Baskervilles, Dr. Watson tracks down the mysterious watcher who has been lurking among the stone huts of ancient man that stand upon the moor, and who turns out to be (SPOILER ALERT) Sherlock Holmes. Watson’s reconnoiter of Holmes’s campsite may lead us to one or two conclusions about Holmes’s pocketknife:


“The ashes of a fire were heaped in a rude grate. Beside it lay some cooking utensils and a bucket half-full of water. A litter of empty tins showed that the place had been occupied for some time, and I saw, as my eyes became accustomed to the checkered light, a pannikin and a half-full bottle of spirits standing in the corner. In the middle of the hut a flat stone served the purpose of a table, and upon this stood a small cloth bundle…. It contained a loaf of bread, a tinned tongue, and two tins of preserved peaches.”


Thus, I deduce three more features of Holmes’s knife: a saw, a can opener, and a corkscrew. At the risk of stating the obvious, fire needs fuel, and fuel must be processed; of the likely sources of fuel for the fire in Holmes’s rude grate – peat, coal, or wood – foraged deadwood is the most likely. A peat shovel would surely have caught Watson’s eye as he surveyed the contents of the hut, and coal would need to be packed in by Holmes’s assistant, young Cartwright. Yet we are told throughout the novel of the ready supply of wood at every turn; indeed, Watson notes a log-fire burning at Baskerville Hall itself.


Furthermore, tins need opening, if one is to enjoy a delicious (?) meal of peaches and tongue, and that requires a tin opener. True, the opener might be among the “cooking utensils” mentioned, but it seems like a superfluous thing to bring along when it so handily fits into a knife, and the backpacker's maxim always applies: "Laugh about ounces; cry about pounds." It is likewise true that one may open a can of peaches (or a can of tongue, for that matter) with the blade of a knife, opener notwithstanding, but we know Holmes takes better care of his equipment than to do such a thing.

Now to the controversial corkscrew: prior to the invention of the bottle cap in 1892 Baltimore, almost all bottles were corked, and spirits were shipped with driven corks, as were wines, so a corkscrew was required to open the bottle. (See period literature, such as Life and Liberty in America by Charles Mackay; or, consult World Whiskey, edited by Charles MacLean.) And what do we find in the stone hut upon the moor? Sherlock Holmes is camping in rough conditions far from home, but among the few comforts to be seen is a half-full bottle of spirits. If not conclusive, it is at least suggestive.


Where and when would Sherlock Holmes acquire such a knife? His scamper through Switzerland in May of 1891 takes him near the heart of the emerging and soon-to-be global phenomenon of the Swiss Army Knife, but Karl Elsener’s firm delivered the first order of his soldier’s knives to the Swiss government in October of that year, and corkscrews began to appear on Victorinox SAK’s only in 1897. At any rate, even Sherlockian chronologists agree that the Baskerville business predates the Reichenbach ruckus, so we must look elsewhere for Holmes’s wonder-knife. We must look back home, perhaps no farther than one block south of the Wigmore Street Post Office and just around the corner from Watson’s tobacconist in Oxford Street, to the firm of Thornhill & Co., in New Bond Street, purveyors of the world-famous Sheffield cutlery since 1734.


Along with Joseph Rodgers, George Wostenholm, and a few others, the Thornhill firm made up the front rank of the Sheffield knife industry, famous since the time of Chaucer; they had few rivals for quality in the world, outside the German town of Solingen, with its own famous names like Haker and Wusthof. The Sheffield houses had been producing multiplex knives, often on a bespoke basis, for over a century by Holmes’s time; the existence of such knives is noted by Herman Melville in Moby-Dick in 1851 when he compares the Pequod's carpenter to one of those highly useful


"Sheffield contrivances, assuming the exterior - though a little swelled - of a common pocket knife; but containing, not only blades of various sizes, but also screw-drivers, cork-screws, tweezers, awls, pens, rulers, nail-filers, [and] countersinkers."

In our upcoming and final installment, we shall examine the remaining items of Holmes's everyday carry and consider the contemporary Sherlockian's EDC options.