"a voice which I shall never forget" [SPEC] 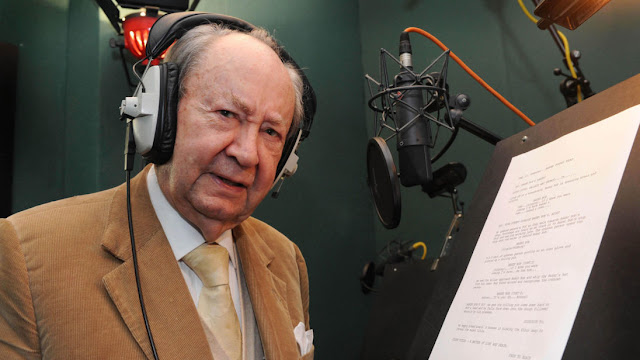 The actor Peter Sallis has passed away at the age of 96.

Sallis was best known in the UK for his role as Norman "Cleggy" Clegg in Last of the Summer Wine from its first episode in 1973 until the series concluded in 2010. He was the only actor who appeared on every one of the 295 episodes.

Internationally — and cross-generationally — he was better known as the voice of Wallace, the cheese lover and inventor, in the Wallace and Gromit animated films by Nick Park.

But in the world of Sherlock Holmes, Peter Sallis will forever hold our imagination and admiration for his turn as Dr. Watson in the stage production of Baker Street in 1965. The Jerome Coopersmith / Ray Jessel musical starred Fritz Weaver as Sherlock Holmes, Martin Gable as Professor Moriarty, and Inga Swenson as Irene Adler.

We interviewed Fritz Weaver and spoke with him about his experience in the Baker Street in Episode 26 of I Hear of Sherlock Everywhere:

Of all of the audio clips we played from the soundtrack, we did not have an opportunity to play Sallis's signature number as Watson, "A Married Man." In this emotional number, Watson recalls his life before meeting his beloved Mary, their life together, and then his eventual status as a widower:

Peter Sallis had a long and varied career on the stage, television and film. And astute listeners and followers of the BBC Radio adaptation of Sherlock Holmes (ref. Episode 68 and Episode 69 with Bert Coules) may recall Sallis as Jonas Oldacre in "The Adventure of the Norwood Builder" with Clive Merrison as Sherlock Holmes and Michael Williams as Dr. Watson.

Sallis stopped performing in 2010 after he gradually lost his sight due to macular degeneration. We had asked his manager for assistance in having Sallis on as a guest on IHOSE, but he graciously declined. Even so, we're fortunate to have a record of Sallis's performances in the instances mentioned above.