Interview: Kareem Abdul-Jabbar on Mycroft Holmes and the Apocalypse Handbook

"So estimable a young man!" [GOLD] 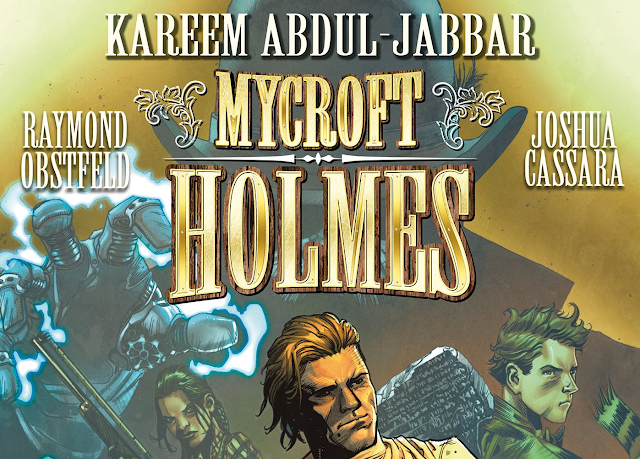 Kareem Abdul-Jabbar's novel Mycroft Holmes was a huge hit when it was released in 2015. He spoke with Scott and Burt on Episode 81 of I Hear of Sherlock Everywhere, where he shared his early exposure to the stories and his favorites therein. [Editor's note: if you haven't listened to his interview yet, we highly recommend it.]

Abdul-Jabbar's Mycroft Holmes returned in comic book form last year with a five-issue limited run titled "Mycroft Holmes and the Apocalypse Handbook." The five issues have been collected into a graphic novel set to come out in September. I had a chance to interview Kareem about his interest in Mycroft and what made him take Sherlock's smarter brother to the world of comic books.


I Hear of Sherlock Everywhere: What drew you to the character of Mycroft Holmes?

Kareem Abdul-Jabbar: People have been writing Sherlock Holmes stories for over a hundred years. I wanted to approach it from another angle, one that was still fairly unknown. Mycroft is a mystery, so writing a mystery about Mycroft is a mystery within a mystery. I got to imagine his origin story and personality with only the slightest clues from Conan Doyle. I especially liked the idea that he was smarter than Holmes and applied his gifts in the service of his government. 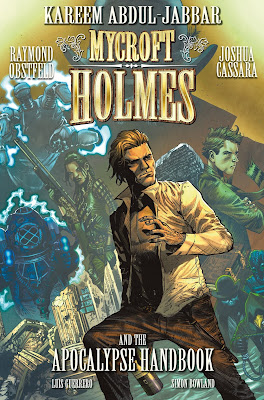 IHOSE: How did you choose your coauthors for this series?

KAJ: Anna Waterhouse, who co-wrote the novels, and Raymond Obstfeld, who co-wrote the comic book series, are actually friends. They are both college professors with long careers in writing movies and books. Anna’s penchant for evoking the historic era made her a natural choice for the novel. And Raymond’s encyclopedic knowledge of and passion for graphic novels made him an easy choice.


IHOSE: In this series, Mycroft Holmes is much more the man of adventure than he is in the Conan Doyle stories. This story line is more of an adventure than your Mycroft novel, also. What drew you to the action genre for this character?

KAJ: In a novel, you have more time to build the subtleties of character and plot that you don’t have in a graphic novel. The graphic novel lends itself more to the visual adventure. Plus, having already imagined Mycroft as one kind of character, I was intrigued by the possibility of presenting him as an entirely different kind of character—a rogue and adventurer. The more I thought about that, the more fun I had with his character.


IHOSE: You are an author who is constantly trying out new genres in hiswriting. Was that the impetus behind telling this story in a comic book format? How did you decide to make Mycroft a comic book hero?

KAJ: Writing a comic book is much more like writing a sonnet than writing a novel. You are limited by how many panels you can get on a page and you are limited to 22 pages in an issue. So everything you do, from the image you select to the dialogue must be precise and serve a purpose. There’s no room for indulgence that you sometimes get in a novel. I also think that the comic book, like most popular culture, is on the forefront of revealing what our values are as a society. Mycroft is pretty much the same as a Millennial right now, trying to figure out what he stands for and what he wants to do about it.


IHOSE: With this being your second outing with Mycroft Holmes, what were the big changes to the storytelling process you had to address with changing from the medium of a novel to a comic book?

KAJ: As I said, precision is the greatest challenge. But that’s also what made the process so exciting. I wanted to tell a large sweeping story that spanned continents, included steampunk elements, had real historic figures, and was a combination of an Indiana Jones and James Bond adventure.


IHOSE: Being the history buff that you are, how much of an influence did historical research play in this story?

KAJ: A lot of research went into every page, from the opening scene at the British Museum to details about Queen Victoria and Jesse James, to the chemicals science in some of the weapons. 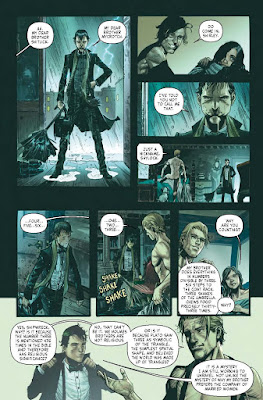 IHOSE: Can you describe the relationship between Mycroft and Sherlock in this story?

KAJ: We see Sherlock in person and in flashbacks when they were children. Sherlock is still just a college student when he appears, but there is fierce competitiveness between them. Where Sherlock has isolated himself from the world by abstaining from its pleasures, Mycroft has isolated himself by overindulging in its pleasures. Where Sherlock feels less, Mycroft feels too much and has to steel himself. Neither fits in because their brains won’t let them. But Mycroft feels it’s his responsibility to imbue some sense of humanity in his brother and that makes for some touching moments between them.


IHOSE: In both of your stories so far, Mycroft finds himself travelling the world. First to Trinidad, and now in America. When you envisioned these stories, did you plan on him being a globetrotter or did that come about later after you developed him? And what made you think to put him in the American west this time?

KAJ: I always wanted him to travel the world in order to have him react to the different locales. Getting his take on these exotic locations is fun and informational and adds a level of entertainment to the mysteries. I loved the idea of Mycroft in the American West just to see how he would handle himself. He sees himself as a bit of a rogue, but when he comes face to face will real rogues, he sees himself in a whole new light.


IHOSE: In your novel, Cyrus Douglas acts as Mycroft’s moral compass. With this story taking place before the novel, Cyrus is absent in the comics. We learn early on that Mycroft is not the most moral of characters. Did you ever find yourself letting Mycroft becoming too much of a cad while you were writing this story?

KAJ: Not at all. We add struggle between the base impulses of our ids and the divine leanings of the superego. Stories of redemption are much more interesting because there’s always suspense about whether the character will make choices based on his roguish nature or desire to be better. 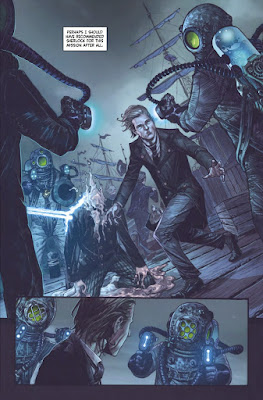 IHOSE: In issue 1, Mycroft says, “We Holmes brothers are not religious.” The Holmes brothers' religion or lack thereof has been a debated topic in Sherlockian circles for decades. What made you decide to place them on the atheist side of that debate?

KAJ: I wanted them to embody pure reason, and religion is not a choice of reason but of faith, which by definition excludes reason. Faith means to believe in something for which there is no evidence. Many people, including myself, find a way to balance faith and reason, but the Holmes brothers cannot make that leap of faith.


IHOSE: Speaking of religion, Conan Doyle wrote that Sherlock Holmes visited Mecca after his battle with Professor Moriarty at the Reichenbach Falls. Do you see an influence of the Islamic religion in Sherlock’s character?

KAJ: Reason and curiosity requires that one explore all religions before either selecting one or dismissing them altogether. The Holmes brothers are influenced by strong sense of human decency, which can be found in all the world’s major religions.


IHOSE: The MacGuffin of this story isn’t one that you would see in a typical Sherlock Holmes story. What made you choose to use such fantastic items?

KAJ: Fun. I want the reader to have a lot of fun with the story and imagining these devices added a level of surprise. Each issue the reader wonders what amazing device will appear next—at least I hope so.


IHOSE: Mycroft’s accomplice in his American adventure has a familiar name to Holmes fans. What was the thought process at naming the character that way, just a nod to the original stories, or is there something deeper there?

KAJ: There’s definitely more to the story. That relationship with [that character (name redacted)] will be revealed in future issues.


IHOSE: A second series has been ordered by Titan Comics. Can we plan on seeing Mycroft abroad again? And can we ever hope to see him teaming up with his younger brother?

KAJ: The ending of the first series suggests they will be working together in some way in the future. That should be very entertaining.


IHOSE: Now that you have told Mycroft stories as a novel and a comic book, do you have a format that you prefer to work in for this character?


Bonus material: our interview with Kareem Abdul-Jabbar in Episode 81 of IHOSE:

Mycroft Holmes and the Apocalypse Handbook by Kareem Abdul-Jabbar is available for preorder on Amazon. It will be released on September 5, 2017.