The Secret Diary of Mycroft Holmes – A Review

"I have all the facts in my journal, and the public shall know them." [STUD] 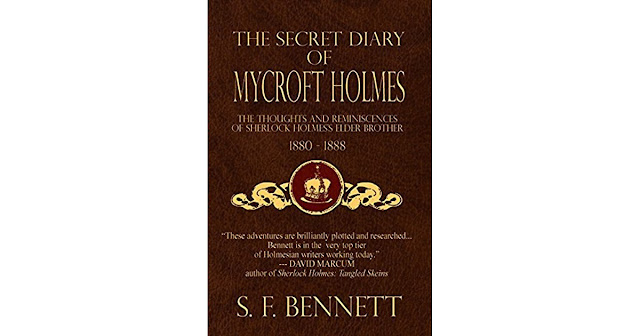 It is unknown if the first to attempt to decrypt this recently rediscovered secret diary was by Mycroft's younger brother, Sherlock Holmes. One wonders if Sherlock may have succeeded, but finding so much of it was devoted to his impecunious existence, discontinued his efforts.
If you have ever wondered what a day in Mycroft Holmes' life was like, this well written and pleasant read is for you. At work, Mycroft suffers from the attentions of an overly interested cleaning lady and interacts with his eccentric coworkers. In those times, as in these, he worries about the new administration and the security of his employment. He even faces a cut in his pay.


Mycroft is a benefactor to his financially insolvent younger brother, and worries about Sherlock's future in his chosen profession. As to his unique profession, Sherlock refers to his calling as a "trade" in an attempt to irritate his older brother. They interacted often before Sherlock established himself, with Sherlock irritating members of Mycroft's Diogenes Club in various ways. Their short stints of rooming together do not go well. Their shared deductive powers are in the background as they discuss Sherlock's prospects, their different approaches to money, and become embroiled in the antics of their extended family. Given the colorful Holmes family members, it is understandable that Sherlock would not desire to see them included in Dr. Watson's tales.
The diary progresses irregularly through events from 1880 to 1888, skipping weeks, then months, then years. Thankful Mycroft chose to record the events that occurred during the period of Sherlock Holmes' life prior to meeting Dr. John H. Watson. We find out about where Sherlock was living, his financial situation and the events leading to his finding digs in Baker Street. Mycroft offers some details of Sherlock's cases, but never enough to offer solutions to their disputed dates. Later, Mycroft puts pen to journal to record the first publication of A Study in Scarlet, and documents his meeting Dr. Watson, both informally and formally.


S.F. Bennett shares The Secret Diary of Mycroft Holmes with us so that we can learn about both Mycroft and Sherlock. Mycroft's insights about his life and his younger brother are enlightening and entertaining. Mycroft's observations and his proof that Sherlock has found a friend in Dr. Watson will be enjoyable to all devoted fans.