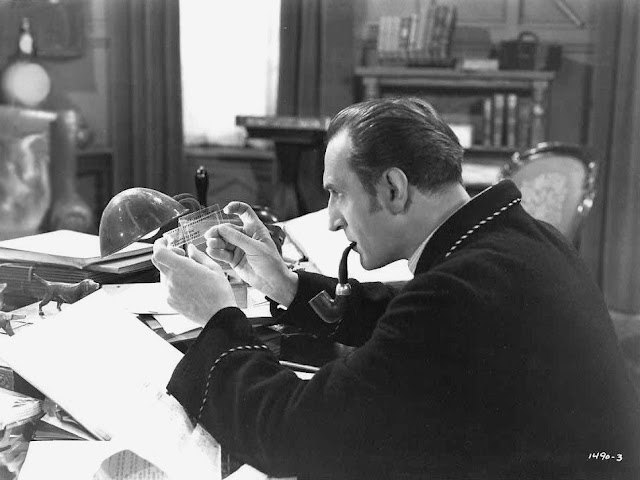 
"I went to my commanding officer and I said that I thought we'd get a great deal more information from the enemy if we didn't fool around in the dark so much . . . and I asked him whether I could go out in daylight. I think he thought we were a little crazy. . . .  I said we'd go out camouflaged -- made up as trees -- with branches sticking out of our heads and arms . . . . We brought back an awful lot of information, and a few prisoners, too."


Rathbone eventually moved from England to the United States, settling in New York in 1923 and then moving on to Hollywood in 1935. His Hollywood years brought him fame in Captain Blood and The Adventures of Robin Hood, where he became known as an able swordsman and a fine villain. And it was in 1938 when he joined forces with Nigel Bruce for a collaboration that lasted from 1939 to 1946 as the most enduring Sherlock Holmes and Dr. Watson to grace the screen.

It is that collaboration that we'll be covering in Episode 122 of I Hear of Sherlock Everywhere. You can listen to the promo for the episode here:


We hope you'll subscribe so you'll be updated when the show airs.

Rathbone left the role of Sherlock Holmes in 1946, fearful of typecasting (he was correct, of course, but too late). His wife Ouida wrote a stage play, "Sherlock Holmes," in 1953, but it closed after poor reviews and only three performances. He made a handful of middle-rate movies in the 1960s, toured in the one-man play "An Evening with Basil Rathbone," and wrote his biography In and Out of Character, which was published in 1962.

We're pleased to reflect on that fact today, 125 years after Rathbone was born.