Sherlock and the Infatuation with Fashion

"all London was interested, and the fashionable world dismayed" [EMPT] 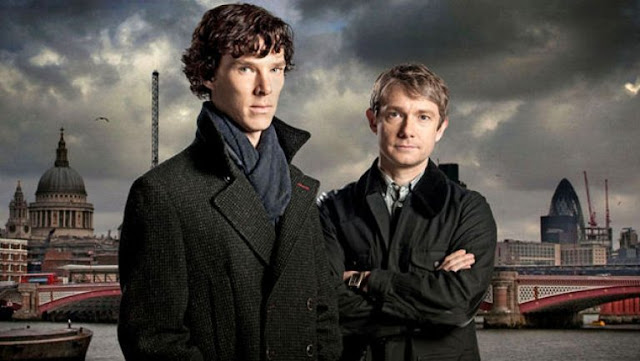 I was thinking about Sherlock the other day (as I so often do), and suddenly my muse poked me in the tummy (as she often does). The realization dawned on me that fashion actually plays a fairly large role in numerous episodes of Sherlock, and often in quite a negative way. I am not sure what to make of this trend, but take a look at some of these examples and see if you can find a deep, underlying message.

Maybe Gatiss and Moffat hate the fashion world. Maybe there is an even deeper meaning that hasn't even occurred to me yet because I'm still recovering from my muse punching me in the belly. Anyway, take a gander and see if anything occurs to you.

A Study in Pink

The title of this episode plays right into my hands, doesn't it? Actually this is what started my pondering. Even though several other "suicides" occur in the episode, much of the focus is spent on the woman in pink. Her pink outfit and the pink bag are discussed in detail as they give Sherlock ideas about her story. Beyond that though, Sherlock analyzes her wedding band and finds bad news (she takes the ring off a lot).

This episode concentrates on a pair of shoes tied to a very old murder case. Even more pertinent to this argument, however, is that Sherlock makes a rapid and in the end distracting evaluation of Moriarty's character based on how Jim is dressed. Sherlock assumes that Molly has managed to find herself tied up with a gay man based on Moriarty's hair styling and way of dressing. Later we find out that in fact Moriarty did that on purpose to capture Sherlock's attention. Are Gatiss and Moffat playing with fashion to capture our attention or distract us from something else?

Although one of the sweeter and more suspenseful episodes, I'm afraid to tell you fashion also plays a dreadful role here. In this case, belt buckles associated with military uniforms do the damage. Fashion does not seem to be a neutral player, now does it?

Perhaps all of this is a revolt against Sherlock's hat. Along with a pipe, most people, when they picture Sherlock Holmes, probably picture that cute little hat (I'm a big hat fan). In a way, it has come to define the character in our societal lexicon. In the show, Sherlock of course hates the hat and only wears it at John's pressing (and because the crowds are expecting it). Maybe the whole point is that fashion alone should not be expected to tell the whole story. The hat certainly does not tell the whole story of Sherlock, just as Moriarty's style certainly did not tell the whole story about him.

On the other hand, maybe this is all just a big coincidence. Maybe my muse was a little drunk the other day, or maybe she is feeling vengeful.

What do you think?