"in his languid fashion" [NORW] 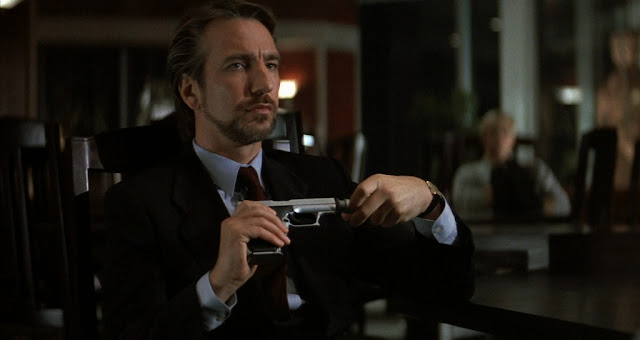 Actor Alan Rickman has passed away in London at the age of 69.

The Shakespearean-trained actor was best known as Severus Snape from the Harry Potter film series, after having gotten his start in film villainy as Hans Gruber in the 1988 action movie Die Hard

. He went on to play other baddies, such as the Sheriff of Nottingham in Robin Hood: Prince of Theieves, with an under-accented Kevin Costner

Another actor who had a part in the 1938 film version of Robin Hood was Basil Rathbone, who played Sir Guy of Gisbourne. Of course Rathbone had plenty of screen time playing villains in addition to his most famous role of Sherlock Holmes in the 1940s.

A little-known connection is that Rickman once played Sherlock Holmes on stage, in the 1976 revival of William Gillette's play.

We'd be remiss if we didn't mention that Sherlock's own Benedict Cumberbatch was a fairly talented Alan Rickman impersonator, most notably demonstrated with his Rickman-off with Jimmy Fallon: