Sherlock: The Abominable Bride Lived Up to Its Name

"there could not be a greater mess" [STUD] 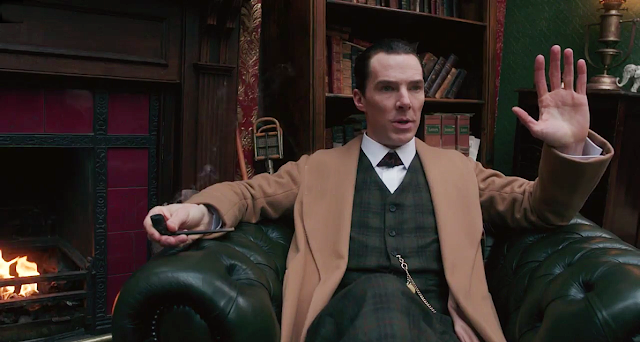 Many Sherlockians like me had high expectations for the recent 2016 special Sherlock: The Abominable Bride

. Wondering how Steven Moffatt and Mark Gatiss would apply modern-day Sherlock's storytelling methods and tropes into a classic Victorian milieu, many Holmes fans like me wondered how the special might fare....and whether it would provide an easier transition for next year's fourth series.

To put it bluntly, Sherlock: The Abominable Bride

is one of the more disappointing entries into the modern-day Sherlock canon.

One of the story's main weaknesses is its script, which throws a wide variety of approaches and elements that frustrate the viewer. Its initial take — that somehow, the 1895 Sherlock cast reflects the attitudes and insights into their modern-day counterparts — feels like a half-measured wink to Sherlock fandom. (It also doesn't help that many of the canonical references — such as Mycroft's girth and seeming death wish — feel played more for comedy than insight). The actual case itself — a bride coming back as a seeming "ghost" — is the only aspect of the episode worth viewing.

However, even the straightforward nature of The Abominable Bride feels compromised by the episode's tricky back-and-forth between 1895 and modern times. As a result, we learn that 1895 is in Sherlock's "mind palace," and that he's reviewing a century-old case in order to gain insight into Moriarty's death and subsequent reappearance. (We also learn that modern-day Sherlock Holmes — much like the traditional Canonical Holmes — has his own issues with addiction to both substances and "brain work.") Soon, both worlds collide, and we receive a very interesting coda to Series Three's "The Sign of Three," as well as another 1895-themed coda.

In short, Sherlock: The Abominable Bride

feels like fan-fiction geared towards both the younger Sherlock fandom who have never read the Canon, as well as toward those hard-liners who believe that Sherlock is "not their Holmes," and prefer a more traditional take on Holmes and Watson. The end result is something that disappoints on both ends — it never coalesces in the way that Series One and Two entries did, nor does it feel like its own separate entity. Sherlock: The Abominable Bride feels more like random Holmes references strung together in search of a story than a story with several random Holmes references.

Even Andrew Scott's appearances as Moriarty in the 1895 sequences feel a bit forced — yes, he does a lot with some very weak material, but it only reflects the disjointed nature of the script. Most Holmesian tales are rather straightforward, even if the solutions take multiple levels of logic to understand — Sherlock: The Abominable Bride suffers from having one mystery complicated by another mystery with multiple references. Towards the end, when 1895 Holmes reveals the end of that mystery, there are several callbacks to past Sherlock episodes that feel incredibly obligatory, as if Gatiss and Moffatt were demonstrating the "cleverness" of their script.

There is one really good thing about Sherlock: The Abominable Bride: it encouraged me to take positive action and download a copy of The Complete Sherlock Holmes

— for the sole reason of revisiting the Canon. Even mishandled, Sherlock Holmes and Dr. Watson provide excellent opportunities for Sherlockians to revisit their original adventures.

In short, Sherlock: The Abominable Bride had an over complicated, fragmented script driving a relatively weak narrative, and is worth a casual view at best.