This Irregular Waited 50 Years to Attend His First BSI Dinner

"In fifty years of official life I cannot recall such a case." [MAZA] 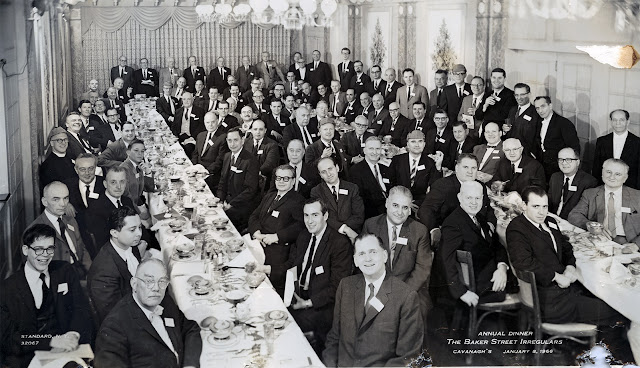 In a few days I will be attending my first-ever dinner of the Baker Street Irregulars. At the same time, this year I celebrate the 50th anniversary of my investiture into the BSI — and I am bound to think that a 50-year story of being a member, but not showing up for the annual event, is a record that, if not unique, is certainly unusual.

Some day, as Dr. Watson put it, the full story may be told. I have toyed with writing a tell-all Sherlockian autobiography, touching on the Baker Street Pageboys, the Bootmakers of Toronto, the Adventuresses of Sherlock Holmes, my writings and friendships, and so much more. Such a document will not be as inflammatory as Douglas Maberley's roman à clef in "The Three Gables," but I suspect it will have to languish unread in some archive for a good long time.

I did sit down a few years ago for a conversation with the wise and considerate Bob Coghill, BSI, who has done many such "oral interviews" for the BSI Oral History Project.

But inevitably, there were many things we had no time to touch on.

For the present, suffice it to say that when I received my Irregular Shilling, I was a mere teenager, living in Kansas, leagues and decades away from the fast life of New York, and for most of my subsequent life my Sherlockian attention has been focused in Canada rather than toward the BSI.


These days I understand that virtually everyone who receives a BSI investiture does so at a January dinner in New York. It was not so in 1966. My certificate (much more modest than the certificates handed out nowadays) and silver shilling arrived by mail one day in the spring of that year, as part of what the then Commissionaire of the BSI, Julian Wolff, called the Edgar W. Smith Birthday Honors List.

Smith, of course, was the first and great Commissionaire, who had died in 1960. In the years that followed, his April 1 birthday was marked annually by the distribution of investitures to those whom Wolff considered worthy of the honour but who had not come to New York and, I suppose, were not expected to. I don't know how long the spring Honours List continued, but it was still in operation in 1969 when my father, Donald A. Redmond, received his investiture as "Good Old Index".

My 1966 investiture certificate as "Billy", with Julian Wolff's signature, hangs on my study wall, within sight as I write these words, and I will be all the prouder of it when I can say that I have actually attended a BSI dinner. And I will think of it again come April 1, fondly — and with amazement that my Sherlockian career has now lasted more than half a century.