"The Mutiny broke out, and all hell was loose in the country." [CROO] 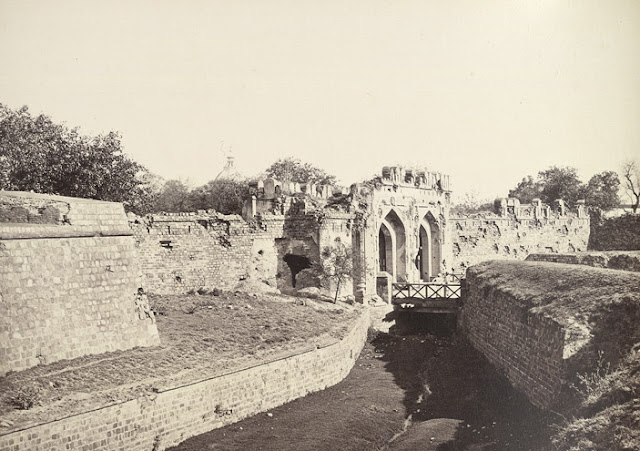 It's very easy to skip over some of the historical background in the (otherwise exciting) Sherlock Holmes stories. We've all done it. Would you know for sure, if I asked you out of the blue, whether anybody by the name of Colonel Greathed appears in any of the tales?

Well, he does. I quote from Jonathan Small's narrative near the end of The Sign of the Four: "A flying column under Colonel Greathed came round to Agra and cleared the Pandies away from it." Thus in 17 words he has his one and only brush with the great detective of Baker Street.

The problem with this sort of reference is that the Indian Mutiny of 1857-58, sometimes known to historians as the First Indian War of Independence, was far more vivid in the minds of the novel's original readers than it is in ours. When The Sign of the Four was published in 1890, the Mutiny was just 32 years in the past. Memories of it were as sharp and detailed as are our own memories of, say, the freeing of the American hostages in Iran in 1981. Indeed, they were probably more so, since our generation has seen many similar traumas since that one. The Indian Mutiny had an impact on public opinion and awareness in Britain that is probably better compared to that of the 9/11 terrorist attacks in the United States: neither would be soon forgotten.

So the readers of SIGN knew about Agra, and knew that Pandies were rebel troops, whether or not they knew anything about Colonel Greathed. At this point we turn to a footnote in Leslie S. Klinger's Sherlock Holmes Reference Library

, which first of all points out that William S. Baring-Gould was wrong in his identification of Greathed. The relevant line in Baring-Gould's The Annotated Sherlock Holmes

suggests that Colonel William W. H. Greathed was the hero in question, but others, including Jack Tracy in his Encyclopaedia Sherlockiana

, put the spotlight instead on his brother, Col. Sir Edward Harris Greathed.

Tracy is, as it happens, correct; it was Edward Greathed whose column of troops relieved Agra on October 10, 1857 (the date is, astonishingly, wrong in Wikipedia). "Peace seemed to be settling upon the country," as Jonathan Small observes.


Edward Greathed (born 1812) had bought his commission, as one did in those days, in the 8th Regiment of Foot, and worked his way up through the officer corps in the same way, with postings to the West Indies, Canada, and (as of 1846) India. His unit — including the aforesaid brother William, of the Royal Engineers — was part of the forces led by Sir Archdale Wilson, also mentioned by Jonathan Small, that recaptured Delhi in September 1857. He then was sent to chase mutineers into Oudh and then to relieve the besieged city of Lucknow. Along the way his troops fought that impromptu October battle at Agra, near the famous fort. He subsequently served under Sir Colin Campbell at Cawnpore before returning to Britain for medals, new commands, and eventually a promotion to general.

The story of Edward Greathed, and his extremely minor role in the saga of Sherlock Holmes, is one of some 800 Victorian dramas that will be included in my book Lives Beyond Baker Street, to be published in March 2016 by MX Publishing.

Image source: Kashmir Gate one year after the siege (Wikipedia)