"fearless in carrying out her resolutions" [NOBL] 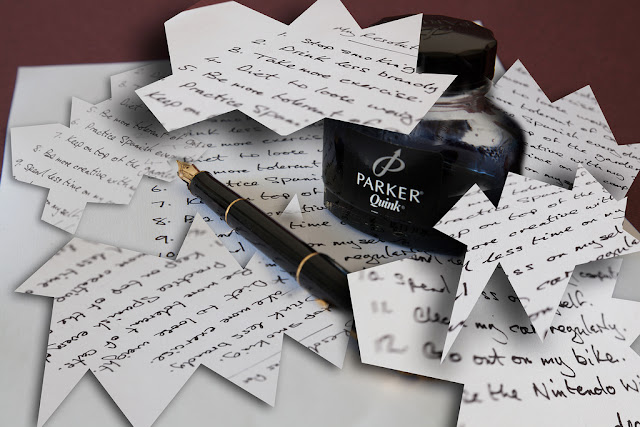 [Editor's note: This is one Sherlockian's list of resolutions for the new year. You can add yours below.]

It is the beginning of a new year, and with it comes the time-honored tradition of making New Year’s resolutions, but instead of talking about our weight loss plans or the gym we probably won’t go to, what can we resolve to do as Sherlockians in 2016?

No matter what avenue our interest in the great detective takes us, it all stems from the original 60 stories of the canon. Revisit the original stories, read them in a different order, read an annotated version, or try to take a look at the ones you don’t care so much for with an open mind.

The Christopher Morley quote, “Never before has so much been written by so many for so few,” still holds true today. The Baker Street Journal and The Wessex Press alone can keep any Sherlockian stocked up on their analyses and think pieces. Blogs and Twitter discussions are another great way to look at these stories in a new light.

There are pastiches and fan fiction out there for any type of Sherlock Holmes fan. From authors who nail the Watsonian voice perfectly, to others who throw caution to the wind and put Holmes in some of the most outlandish situations possible, there is something to suit your style. This can truly be an overwhelming undertaking, so check out Episode 82 of I Hear of Sherlock Everywhere to get some insight into the world of Sherlock Holmes pastiches.

Is there a movie or television version of Holmes you haven’t seen yet? Maybe this is the year to give it a try. Much like pastiches, this area offers many varieties. Whether you’re a William Gillette

fan (or both!), there are bound to be films or DVDs that you haven’t had time to sit down and watch.

Not every Sherlockian film project can have a budget to get it to a network or the big screen. We are in the age of user created content on the internet, and people can put out a product that shows their true passion for a source material. Many YouTubers have created their own Sherlock Holmes series to high acclaim. For those of us who are used to only watching things on TV or in a movie theater, 2016 might be the year we branch out and see what other Sherlock Holmes fans can create.

But the world of Sherlock Holmes isn’t just about consuming what others have made. Get out there and create something of your own! Contributing to a scion society newsletter or journal, or larger publications is one way to share your thoughts on Holmes and Watson with others. Want to be more digital? Create a blog or offer to write for one of the many great Sherlockian blogs already out there (I hear the guys at I Hear of Sherlock Everywhere will let just about anybody write for them…).

Or maybe you’re a more creative type. We’ve all had the germ of our own Sherlock Holmes story rattle around in our head from time to time. Make this the year that you put it down on paper. Create a new story and share it with the world. You don’t have to be a published author to come up with a case. Let your creative juices flow!

The Sherlockian community is built on relationships. Get out there and find others who are just as interested in Holmes and his world as you are. If you are looking for people to sit down and talk about stories with, find a scion society near you. If you are more comfortable behind a keyboard, look to the digital world. Facebook groups, message boards and Twitter conversations are out there waiting for you.


It might not be 1895, but you can still revel in the Sherlockian world this year. Tell us in the comments below what are your Sherlockian resolutions for this year and let us know if we missed any. Happy New Year!