From Gillette to Brett IV - Something for Everyone 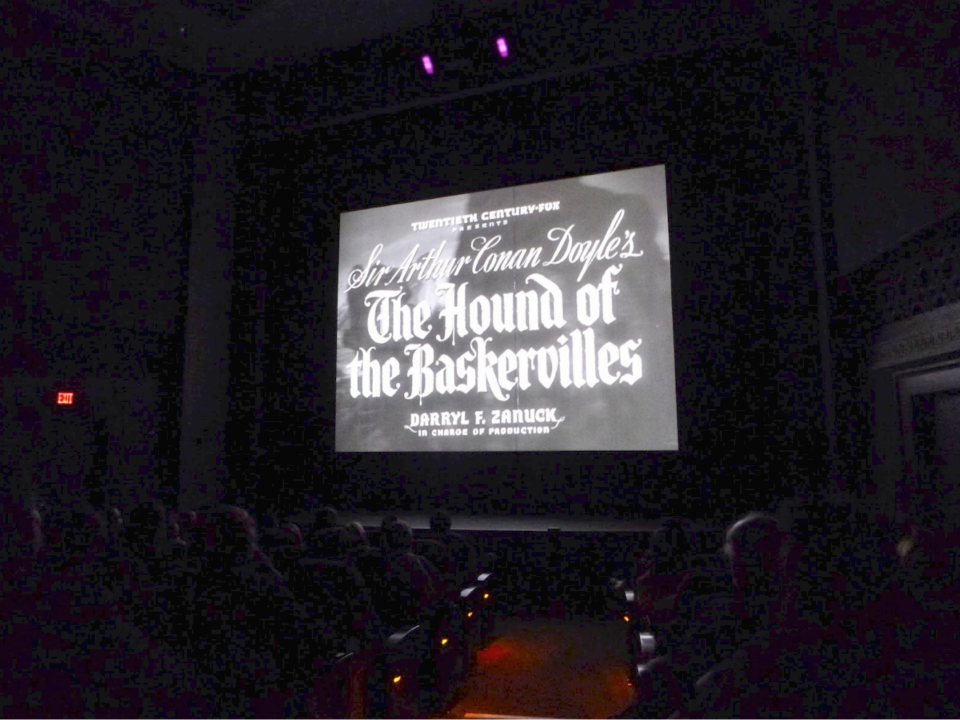 The third in our series of recaps of #G2B4

There is a memorable moment in “The Red-Headed League,” where Holmes sits in St. James's Hall listening to Sarasate and “wrapped in the most perfect happiness.”

Such was the case in the Indiana University Cinema when a theater packed with Sherlock Holmes enthusiasts and a few dozen college students were enraptured by a 75th anniversary screening of The Hound of the Baskervilles starring Richard Green, Basil Rathbone and Nigel Bruce. To be in a real movie theater, have the lights dimmed, the curtain raised and the familiar story unfold as it was designed to do would have been enough; but to be with fellow devotees who mouthed “Mr. Holmes, there were the footprints of a gigantic hound” along with the scene chewing Lionel Atwill was a “most perfect happiness" indeed.

And that is really the point of a gathering like From Gillette to Brett IV, which was held Sept. 12-14 at the University of Indiana under auspices of Steve Doyle and Mark Gagen's Wessex Press While we all acknowledge the primacy of the original Canon, so many of us interact with Holmes through film, television, radio and digital media today that a weekend devoted to its explication is entirely appropriate.

The primacy of the originals was certainly acknowledged early on, as we toured the treasures of the university’s Lilly Library. Have you ever picked up an incredibly good copy of Beeton’s Christmas Annual for 1887? I have. I had to give it back, of course, but Lilly Director Joel Silver was enormously generous, offering up opportunities to see treasures that a collector might take a lifetime to view. Of particular interest was the hand-written note Sherlock Holmes left at the Reichenbach and acquired by David A. Randall, the library’s first director. To have such a treasure before you brings goose-bumps.


I won’t recount in detail each presentation from Saturday, except to say there were insights and delights galore: Bonnie MacBird, the screenwriter behind such films as the original “Tron,” thoughtfully drew parallels between the BBC Sherlock series and the Canon; Kristina Manente, founder of The Baker Street Babes, educated us old Sherlockians into the ways of “headcanon” and other path of the newest generation of enthusiasts; David Stuart Davies left us crying with laughter as he showed that Sherlaugh Holmes was not a misprint; and Burt Coules walked through more than 80 years of Holmes on the radio with particular attention to the BBC radio adaptations of the complete Canon starring Clive Merrison. It made me sad that radio drama no longer flourishes on U.S. airwaves.

Finally, Paul Annett discussed his involvement in the early years of the Granada television series starring Jeremy Brett. The early adaptations were lovingly recreated from both Arthur Conan Doyle’s words and Sidney Paget’s illustrations. Which makes it strange that Brett, who so looked the part when he started, wanted to wear a putty nose and use a funny walk as Holmes. Annett wisely talked him out of those notions and the series has gone on to become a beloved touchstone.

The huckster’s room had a nice selection of wallet-depleting treats, including treasures from the collection of Steve Doyle, which were not for sale.


In all, it was the kind of event that blended old-school Sherlockians with new breed “Sherlock”-ians in a warm and welcoming atmosphere.

We all hope that a fifth act of this long-running show will come along in three years or so.