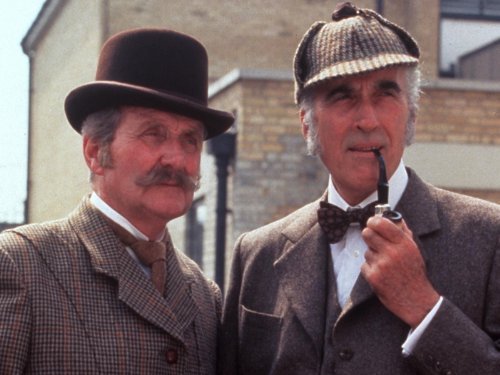 Actor Patrick Macnee has passed away at the age of 93 at his home in California, due to natural causes.

While widely known for his portrayal of secret agent John Steed with Diana Rigg's Emma Peel in the 1960s television show The Avengers, and perhaps less so for his role opposite Roger Moore in A View to a Kill, Macnee has a deeper connection to Sherlock Holmes.

and Incident at Victoria Falls

, in which they portrayed a retired duo assigned to tasks by Mycroft Holmes and King Edward VII and meet Irene Adler and Lillie Langtry, respectively.

But perhaps more interesting is Macnee sharing the distinction with only a handful of other actors (including Jeremy Brett, Reginald Owen, Edward Woodward, Howard Marion-Crawford and a select other few) of playing both Sherlock Holmes and Dr. Watson. Macnee appeared as Sherlock Holmes in The Hound of London (1993) and in an episode of Magnum, P.I. as David Worth, who believed he was Sherlock Holmes.

While we're on the subject of interesting, the connections to three of Macnee's co-stars above should hold some attention. Roger Moore, aside from playing James Bond, also played Sherlock Holmes in Sherlock Holmes in New York - another film in which Macnee played Dr. Watson, notching his appearances as Watson at three. John Hillerman was of course Higgins from Magnum, P.I., where his appearance with Macnee was as his Watson, and he also played Watson to Edward Woodward's Sherlock Holmes in The Hands of a Murderer. And Dame Diana Rigg took over the hosting duties at Mystery for Vincent Price, and she introduced a number of the later Jeremy Brett episodes on the program.