"He had got back from the theatre about midnight." [RETI] 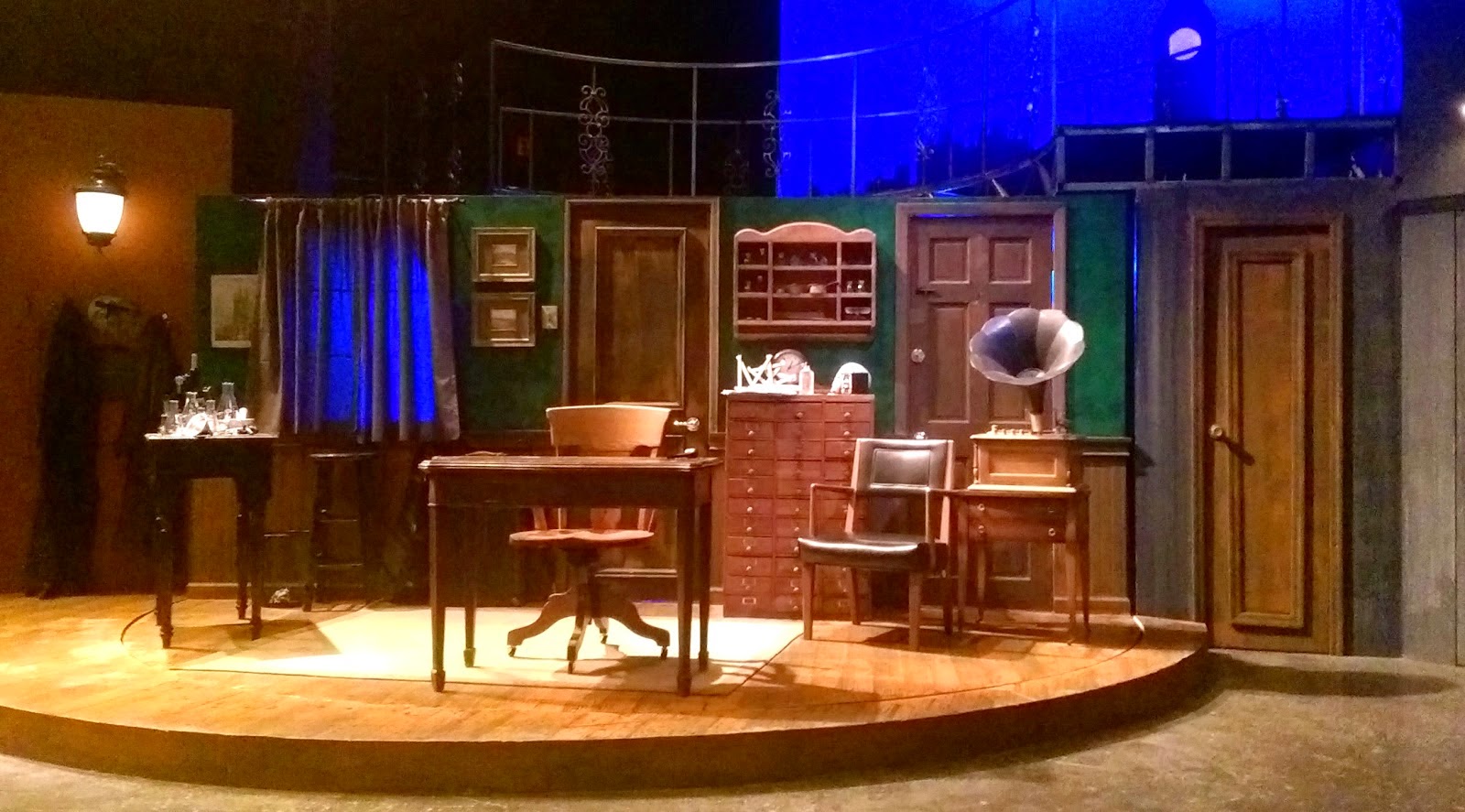 Playwright Steven Dietz was commissioned by the Arizona Theatre Company in 2005 to write a Sherlockian play; the result was Sherlock Holmes: The Final Adventure. The world premier of Sherlock Holmes was produced in 2006 by the Arizona Theatre Company and the play was awarded an Edgar Allan Poe Award for Best Play in 2007. My wife and I were fortunate enough to attend the Ethington Theatre's recent production of the play. The Ethington Theatre is a small, intimate venue on the campus of Grand Canyon University in Phoenix, Arizona.


Adapted from the 1899 play by William Gillette and Conan Doyle, Dietz's Sherlock Holmes: The Final Adventure retains some of the same plot points as the Gillette play while at the same time repackaging them with some new elements. Dietz's adaptation is a clever blending together of the major plots from A Scandal in Bohemia and The Final Problem, but unlike the Gillette script Dietz keeps the name of Irene Adler for the female lead character.

Sherlock Holmes: The Final Adventure is at heart still a mystery/adventure story, but Dietz also incorporates elements of romance and humor involving the characters of Holmes and Watson, which are themes that are not typically as prominent in the Canon. Holmes is portrayed as somewhat of a smug, condescending character who enjoys a joke at Watson's expense. As for the Doctor, he comes across as a bit of a bumbling oaf. It doesn't ruin his character, but that aspect of the Watson persona is certainly played up more than is typical. One of the most notable departures from the Canon is Holmes' romantic involvement with Irene Adler.


The story is narrated throughout by Doctor Watson, as one would expect, and chronicles the tale of the scandal involving the King of Bohemia and the desperately sought after photograph of the king and Miss Adler. The photograph and the character of Godfrey Norton play a much larger part in the grand scheme of this adaptation than in A Scandal in Bohemia. After several attempts at retrieval of the photograph and just as many run ins with Professor Moriarty and his minions, the play culminates in that iconic struggle at Reichenbach Falls.


Sherlock Holmes: The Final Adventure is a masterful meshing of the plots from two of the most well known stories from the original Sir Arthur Conan Doyle short stories. The audience is also presented with an interesting perspective on Holmes' two rivals; the evil Moriarty and the beautiful Irene Adler. Each of them outwit Holmes in various ways, but yet the contrast between their characters is very striking.

Steven Dietz does a fine job of marrying the quintessence of the Holmes and Watson characters with a few new characteristics resulting in a play which provides a couple of hours that are quite entertaining. And while Canonical purists may not appreciate Sherlock Holmes: The Final Adventure most folks will find it quite enjoyable; even those who are not hard-core Holmes fans.


Editor's note: J.D. Sutter is a new media consultant and founder of Porchlight Family Media. He has been a Holmes enthusiast since reading The Speckled Band in grade school. This is his first contribution to IHOSE.
--