"Genuine admiration - the characteristic of the real artist" [VALL] 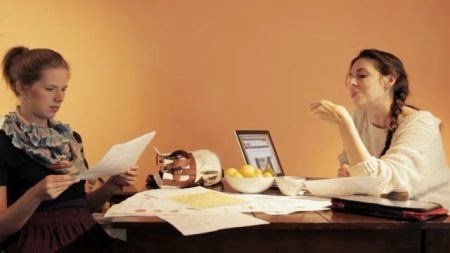 Conversation in Sherlockian as well as other communities (including Doctor Who fandom and the New Pulp movement) often leads to at least one individual declaring a particular approach to a character inappropriate.

In other words, someone declared the battle cry of "My Holmes wouldn't do that".

Even with Sherlock Holmes and John H. Watson as public domain characters, any variation from the Canon becomes somehow sacrosanct. Differing approaches are seen as passable...but somehow off-label when it comes to how a character should be portrayed.

So when the opportunity came to view the new online Baker Street series (reviewed by another contributor here recently), I eagerly took it...and I'm glad, because Baker Street is a very entertaining, unique take on the Holmes mythos.

Created, co-written, and featuring Hannah Drew and Karen Slater as Holmes and Watson, Baker Street should not be dismissed as a fan-made gender-flipped Sherlock. Even though (as Jacquelyn mentioned in her review) the series starts off awkwardly, there is a great, playful inversion of many Sherlockian tropes. (In fact, Baker Street most accurately resembles the Gary Reed/Guy Davis graphic novel Honour Among Punks). There's a wonderful sense of immediacy to Baker Street, and unlike Sherlock, the web series takes its time in building narrative momentum despite some early, awkward moments.

But Baker Street's greatest asset is how it demonstrates the strength of the canon. Baker Street takes some great creative risks, but at no point does any of it feel inauthentic or somehow betraying the original canon. For those who prefer Conan Doyle's original work - it will still stand. But Baker Street takes some intriguing, clever chances, and demonstrate the ideal that now, Sherlock Holmes is everyone's Holmes, and that creative variations on a theme can bring about new aspects and insights. (Including, as my colleague intimated, the fact that Holmes might be involved in some less-than-legal-yet-still-moral activities before meeting Watson)

The series may not have the flourishes of language that Conan Doyle's work, but Baker Street makes the effort to bring a real-life sensibility that even Sherlock and Elementary lack. It's a solid series (with some NSFW language), and more importantly - deserves your attention, because it performs the most elementary of tasks.

For those who believe that "their Holmes wouldn't do that", Baker Street politely reminds the viewer that Sherlock Holmes now belongs to everyone.

See the entire 3-part series, along with a Q&A with Hannah and Karen: