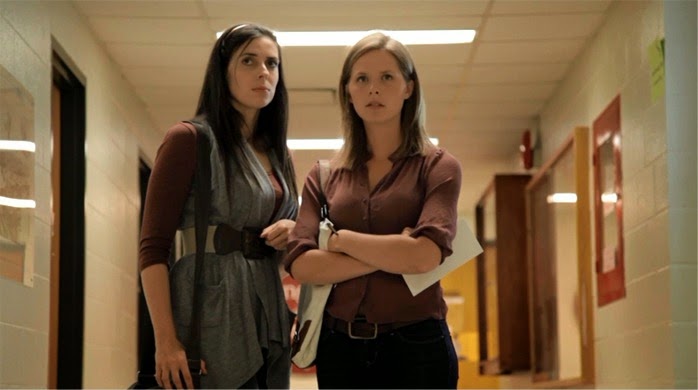 Most of us have seen adaptations of Holmes and Watson on stage, in film, on television, in comic books, and as cartoons. With few exceptions, both characters have been portrayed by male actors. The CBS television show, Elementary, has a female Watson, as did The Return of Sherlock Holmes with Dr. Watson’s granddaughter, Jane, back in the late 1980s.

But in Baker Street, a new video series created, written by, and starring Hannah Drew and Karen Slater, we have Holmes and Watson both played by women. Based in contemporary times as are Elementary and Sherlock, the location of Baker Street is neither London nor New York, but Toronto. Watson in Baker Street utilizes modern technology as BBC’s does by “vlogging” (video blog), and both Holmes and Watson rely heavily on their mobile phones. But here the comparison to Sherlock ends.

There are currently three episodes of Baker Street, each one longer than the previous. The first episode begins rather shakily and self-conscious, as if the writers/actors are keenly aware that they are treading on hallowed ground. Somewhat contrived and awkward, the short video attempts to establish the characters—college-age women, each in need of a roommate—as initial adversaries, similar to the relationship between Holmes and Watson in the early episodes of Elementary. Watson seems flighty and annoying; Holmes is grumpy and distant—worse than an odd couple they seem destined to kill one another in their sleep. If you stopped there, though, you would only cheat yourself.

[I must add that, like real college-age women, Watson and Holmes use profanity in conversation. This might be off-putting to some, and I offer a NSFW (not safe for work) caveat.]


It is in episode two that we see Drew and Slater beginning to find their footing, both stylistically and canonically. While we are given to believe that this Watson has the wandering eye of the canonical Watson, a creepy scene with her new employer (a married professor much older than she) includes flirting and insinuation that there is a relationship outside of the office. I found this jarring and unnecessary, and its later denouement could have been reached without the creepy factor.

In episode two we are generously given some canonical treats. Referencing “The Blue Carbuncle” the production offers us the “Blue Diamond of Morcar,” which has gone missing and which Holmes finds in “anser anser domesticus” or domestic goose (thankfully, the famously nonexistent crop is not mentioned). We are introduced to Constable Stan Hopkins and his puppy dog eyes for Watson, and we find out that Holmes has a sister named Mycroft, who helped get her out of some trouble with the police. [It is worth noting that what Holmes does as a profession is somewhat murky, but it involves car theft, chemical experiments, and a mysterious arrangement doing research for professors, though apparently not Watson’s employer.]


The longest of the episodes is the final one so far released. In episode three Drew and Slater take off running. Wit and humor enter the mix, and Watson is no longer annoying but quite capable; Holmes is less grumpy and more thoughtful, and we see a friendship developing that has a welcome familiarity.

While episode three continues to contain references to BLUE, there is a brief scene involving details about a case that is the kissing cousin to “The Red-Headed League.” As in moments of canonical recognition in Sherlock, this one made me chortle with glee. Another fine moment was in how Watson saves Holmes from a physical assault by a very unsavory character—but I will let you experience that delightful moment for yourself. [NOTE: It is briefly mentioned in a previous episode.] I did find the means to be quite clever; a delightful ground-breaking moment of contemporary efficiency.

In a memorable scene we see conflict between Watson and sometime-boyfriend Hopkins, where Hopkins must arrest Holmes. This scene contains some fine acting and a delightful throwaway line from Holmes. “I’m not going to arrest myself!” she exclaims, voluntarily walking to the police vehicle as Watson and Hopkins morally struggle with his loyalty to his job and her loyalty to Holmes.


There are moments of brilliance in this final episode—we meet Mary Morstan, a reporter for a college newspaper called “The Strand,” and we find out some surprising details about Watson’s employer/paramour—but as in the revelation of Watson’s manner of saving Holmes, I choose to allow you those moments unspoiled. However, one thing I will tell you is the final line of this episode of Baker Street (a cliffhanger). Holmes says to Watson: "The game is afoot, Jane, and I think we might have made a slight misstep."

Though Drew and Slater had a few missteps in the beginning, I am confident that they stand on solid ground in Baker Street, and I truly hope there will be more episodes forthcoming.