"with triumph in his eyes" [SIXN] 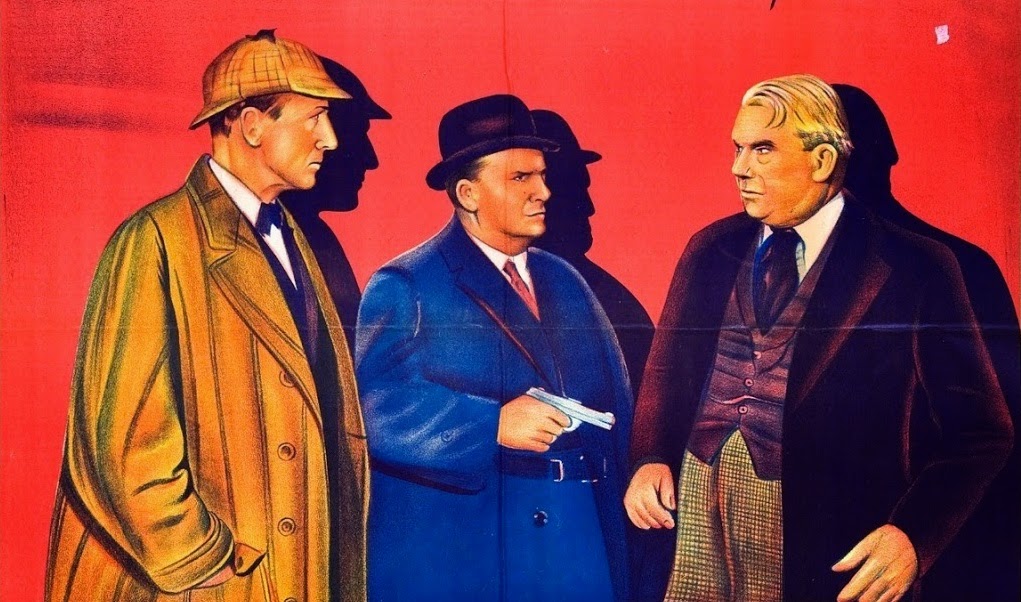 [Editor's note: this is the second in a series of four posts on the Arthur Wontner Sherlock Holmes series, as reviewed by David Lee Andrews of Comic Book and Movie Reviews.]

Did you know that Sherlock Holmes has been depicted in the movies more than any other fictional character throughout cinematic history? Yeah. It's fairly elementary, don't you know. You just ask any of those nice chaps seen in the following 75-minute flick made in 1935. It was directed by Leslie S. Hiscott; and starred Arthur Wontner, Lyn Harding, with Leslie Perrins.

Why thank you very much for coming out of retirement to investigate the death of my husband, Mr. Holmes (Arthur Wontner). Yet, to be completely honest with you, I had a sneaking suspicion something like this was going to happen sooner or later.

You see, many years ago, while we were living in America, my late husband John (Leslie Perrins) joined a gang of crooks who frequented a nearby tavern. And I'll tell you something for nothing, Mr. Holmes, this motley crew were really up to no good. Extortion. Thievery. The works. They did everything in their power to make a fast buck in spite of the local authority's best efforts.

However, as time past John finally decided to show his true colors. And this in turn resulted in some of the gang being pinched, while me and my other half made it all the way back to England for safe keeping.

Well. We thought we were, anyway.

But then again, that's most probably why what happens next goes all old-school when Doctor Watson (Ian Fleming) catches me laughing in the garden. As the game is afoot - a string of lies goes kaput - a dead man eventually join's the party - and at the end of the day, look out Holmes, for here comes Professor Moriarty (Lyn Harding)!

Now I know that this may sound fairly straight forward and pedestrian on the surface, dear reader. But as I just said, the two halves presented were very unequal. Essentially it favored the 'back-story' part of the narrative more than the 'Holmes' part of the narrative, and this inadvertently made the 'Holmes element' act as a book-end to the overall murder mystery.

I also noticed that the exposition came across somewhat top-heavy on occasion. And even though I did like the way the actors acted - all upper-crust, working class, or prim and proper - in the same breath some of them weren't able to give their words any form of gravitas or depth.

Of course I'm not referring to Arthur Wontner's or Ian Fleming's performances. Generally speaking their portrayal of Holmes and Watson was very warming on the screen. As a matter of fact, not only was it warming, my friends, I'd even go so far as to say their on screen chemistry felt more authentic than some of the other actors who have attempted to play these parts.

Well. Let's face it. Doesn't Wontner look like Sherlock Holmes to you? Furthermore, if you ever get around to watching any of his movies, I bet you anything you'd think he sounds like him as well! Especially when he does one of his summations to explain why x did y to z! 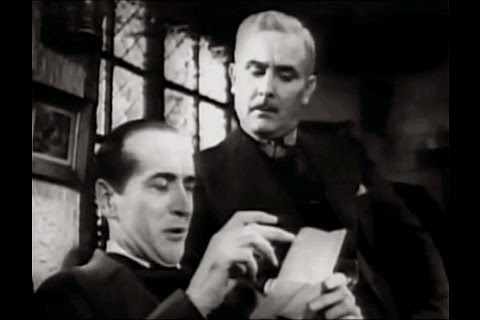 Also, something else about this movie I thoroughly enjoyed, where those scenes where Sherlock encouraged Watson to 'chip in' on the investigation. In my eyes these sequences show what's at the very heart of Sir Arthur Conan Doyle's creation. A partnership and a common bond that illustrates they're very much two halves of the very same coin. A coin, I might add, that outshone the wise-guy 'back-story' component even though it had a lot less time in the spotlight

Anyway. I'm sure you know by now my feelings towards this fairly good murder mystery. So I tell you what. Why don't you now sit back, relax, and check out the following cinematic facts.

Overall I'd say The Triumph of Sherlock Holmes was a rather pithy little footnote on the whole Sherlock Holmes mythos. Even though the back-story overpowered Holmes's presence, as push comes to shove, Holmes and Watson still made it through despite its bi-polar tone.