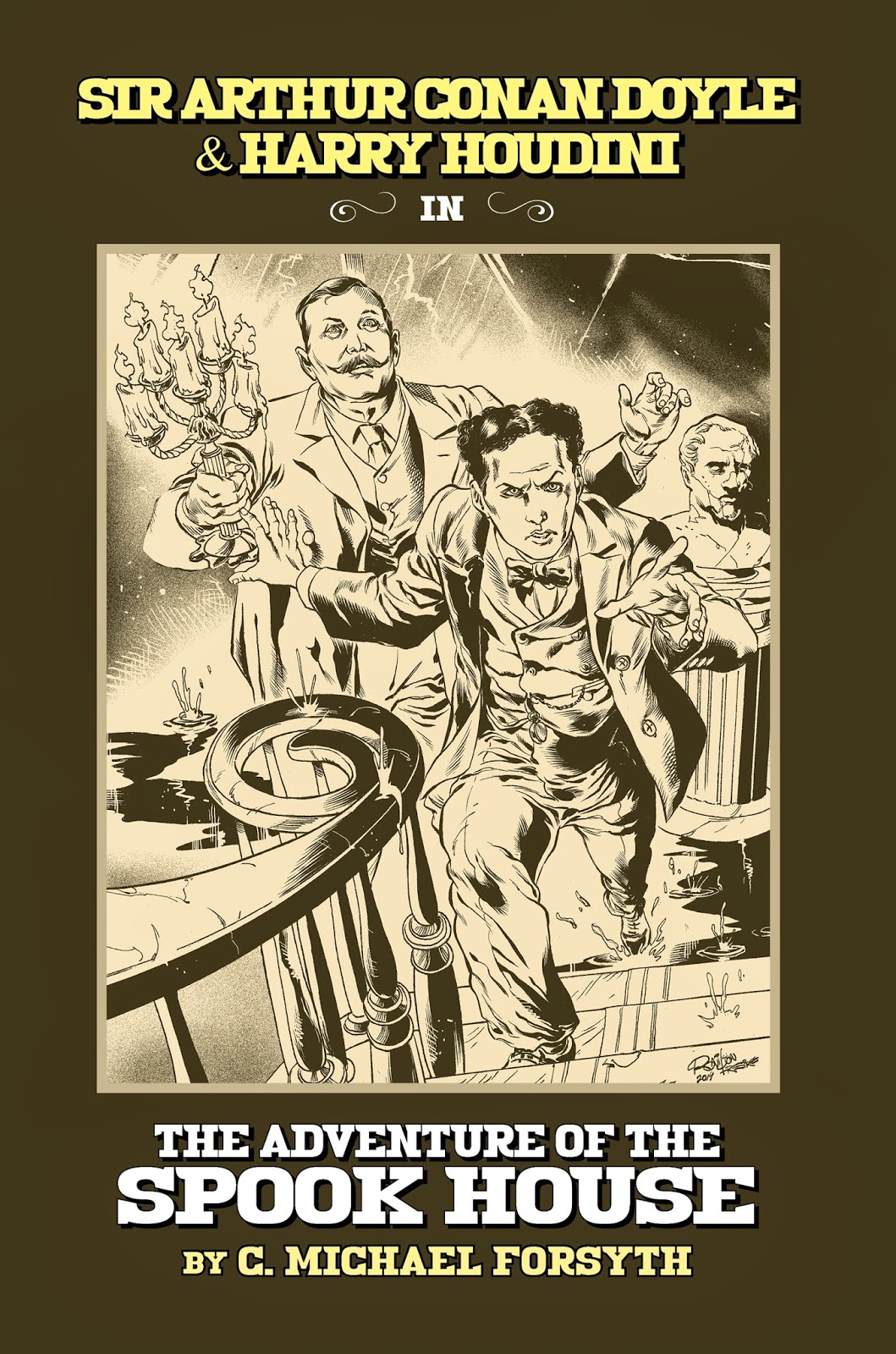 But a new novel, Sir Arthur Conan Doyle & Harry Houdini in The Adventure of the Spook House, is a ripping good yarn about a fictitious adventure of the two men that incorporates interesting and accurate background information on each. The book is available as of March 24 - appropriately enough, the 140th anniversary of Harry Houdini's birth - in both paperback and Kindle. (Amazon US | Amazon UK)

Author C. Michael Forsyth did a commendable job of researching their relationship, and has more than a passing knowledge of their individual biographies as well. In his Afterword he notes that he “fudged almost no details about their lives prior to the . . . fictional events . . . set in 1922.”  He even uses their own words verbatim from published letters, speeches and interviews in order to capture their personalities and manner of speaking. You definitely notice their different speaking patterns and their very different attitudes as they encounter a very ‘spooky’ mystery.

The mystery is introduced by a fellow M.D. from the United States who seeks out the help of Sir Arthur.  He describes the mysterious disappearance of a close friend in an old, abandoned mansion.  Sir Arthur prevails upon his friend Houdini to journey with him to investigate and determine if spirits were involved or if a more mundane explanation can be provided. Harry and Sir Arthur journey together to Virginia where they hear of the history of the old house which was converted to an inn by its architect owner who went mad after the death of his wife. They hear rumors of occult rituals, possible murders, other disappearances over the years, and a phantom disappearing dining room with the bodies of the missing victims, very dead indeed, sitting around the table.

While Houdini and Conan Doyle both look for explanations that fit their own biases, they do proceed methodically, attempting to eliminate the impossible and find the improbable answer to the mystery. Harry, of course, is extremely skeptical but willing to work with Sir Arthur who arranges a séance in the house with a medium known to Houdini (the medium apparently was modeled on the real life ‘Margery,’ who was subjected to an examination by Scientific American, and whom Houdini did attempt to unmask as a fraud). Sir Arthur is appreciative of Houdini’s expertise at uncovering fraud, but continues to believe that Houdini himself has ‘mystic’ powers to which he will not admit.

It was a fun read and I especially enjoyed the cover artwork by Ronilson Freire – it would make a great poster if available. Sir Arthur Conan Doyle & Harry Houdini in The Adventure of the Spook House by C. Michael Forsyth is available on Amazon in print and electronic versions. (Amazon US | Amazon UK)

[Editor's note: Bob Stek, BSI is ‘the mysterious scientist’ and co-author of “Sir Arthur Conan Doyle and Harry Houdini: Their Friendship (and Debates) Continue?” in the Journal of Spirituality and Paranormal Studies, July 2011 – Vol. 34, # 3]