How Much Do We Really Know About Mrs. Hudson? 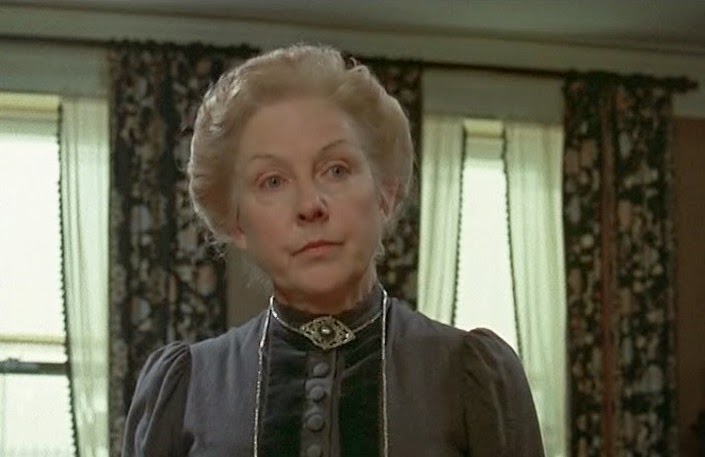 That sentiment probably sums up most Sherlockians' feelings of literature’s most famous landlady; Baker Street would not be Baker Street without Mrs. Hudson. But the fact is she is barely in the Canon and we know next to nothing about her. In the first Holmes and Watson adventure, A Study in Scarlet, where we might expect one of Watson’s insightful thumbnail sketches of the woman she is unnamed and unseen.

What do we know about her?

At one time she was married.

Yes, she is Mrs. Hudson but nowhere is it stated she was a widow or ever married. "Mrs." could have been an honorific, a title of respect for a businesswoman. As Wikipedia has it: "In several languages the title for married women, such as Madame, Señora, Signora, or Frau, is the direct feminine equivalent of the title used for men; the title for unmarried women is a diminutive: Mademoiselle, Señorita, Signorina, or Fräulein. For this reason, usage had shifted towards using the married title as the default for all women in professional usage. This had long been followed in the United Kingdom for some high-ranking household staff, such as housekeepers, cooks, and nannies, who were called Mrs. as a mark of respect regardless of marital status." Those of a certain age may well remember calling their elementary school teacher "Mrs. Jones" whether she was married or not.

She was a portly, motherly (or grandmotherly) woman.

Much has been made of the unnamed landlady's "stately tread" in STUD, the closest thing we get to a physical description of her. From it scholars have inferred her weight and age, but the statement has been taken out of context. "Ten o'clock passed, and I heard the footsteps of the maid as they pattered off to bed. Eleven, and the more stately tread of the landlady passed my door, bound for the same destination." The landlady's tread is "more stately" than the maid's patter. The maid may well have been a young teen, a common enough occurrences for the time, and the adult Mrs. Hudson would have a statelier tread by comparison. Nowhere else in the Canon do we get any hint of her age. Manly W. Wellman and Wade Wellman postulate that she was a young widow and in their pastiche Sherlock Holmes’s War of the Worlds make her Holmes’ love interest.

Her first name may have been Martha.

Vincent Starrett's essay "The Singular Adventures of Martha Hudson" in Baker Street Studies (an essential for any Sherlockian library) has had a profound influence on the popular conception of Mrs. Hudson. He writes:


Whether she owned the building or rented it from another is not clear; but---although it is nowhere explicitly stated---there can be no reasonable doubt that she retired with Holmes in Sussex….Writing, in his retirement, of the curious mystery of The Lion’s Mane, it is Holmes himself who furnishes the clue. "My house is lonely," he tells us. "I, my old housekeeper, and my bees have the estate all to ourselves."

Starrett then baldly states that it was Mrs. Hudson that Holmes placed in Von Bork’s household ("That is Martha, the only servant I have left.") in "His Last Bow." There is no evidence to suppose Mrs. Hudson was either or both women and plenty to suggest she was neither. In LAST, there is no recognition or greeting from Watson that Martha is the old Baker Street landlady that he had probably not seen in ten years. And it seems unlikely that Mrs. Hudson would voluntarily take a decrease in social rank from independent businesswoman to housekeeper to stay with a former lodger that "must have sorely tried her patience" over the years. Further, in LION, it seems more probable that Holmes is speaking of his aged housekeeper, not his former landlady-now-domestic.

If we look at the Canon as a series of plays we can see what a bit player she really was on the Baker Street scene. On-stage in 11 out of the 60 stories; out of 11 stories speaks only 3 times; 26 lines of dialogue. Contrast that with Professor Moriarty, who is in only one story out of 60, "The Final Problem" (although mentioned in several), and is off stage—present only in Holmes’ reminiscence—but has 21 lines of dialogue.

Special note: in ENGR Watson brings Victor Hatherley to Baker Street where Holmes was "lounging about his sitting-room in his dressing-gown, reading the agony column of The Times, and smoking his before-breakfast pipe….He received us in his quietly genial fashion, ordered fresh rashers and eggs, and joined us in a hearty meal." Mrs. Hudson--not present, not mentioned, not even a thought to Holmes or Watson; it's as if breakfast magically appeared.

Even in those adventures where she has a large part to play we are aware of her separateness from Holmes and Watson. In "The Dying Detective," Mrs. Hudson goes to the home of the married Watson to seek help for the apparently dying Holmes. After seeing Holmes, Watson goes to Culverton Smith leaving Mrs. Hudson "waiting, trembling and weeping, in the passage". At the end, after Smith is lead away from Holmes’ bedroom in handcuffs by Inspector Morton, do we get a scene with Mrs. Hudson relieved that Holmes is not dying and anger at him for being fooled ("It was very essential that I should impress Mrs. Hudson with the reality of my condition, since she was to convey it to you, and you in turn to [Smith]. You won't be offended, Watson?")? No, it’s off to Simpson's for the pair and the reader is left to conjecture on Mrs. Hudson's mental, emotional and physical state.

In "The Empty House," after hours during which she crawled into a sitting room where an air gun bullet could fly at any moment, she is brusquely dismissed by Holmes.

"I hope you preserved all precautions, Mrs. Hudson?" said Holmes.

"Excellent. You carried the thing out very well. Did you observe where the bullet went?"

"Yes, sir. I'm afraid it has spoiled your beautiful bust, for it passed right through the head and flattened itself on the wall. I picked it up from the carpet. Here it is!"

Holmes held it out to me. "A soft revolver bullet, as you perceive, Watson. There's genius in that, for who would expect to find such a thing fired from an air-gun? All right, Mrs. Hudson, I am much obliged for your assistance. And now, Watson, let me see you in your old seat once more, for there are several points which I should like to discuss with you."


In the Granada series, Mrs. Hudson brought up a bottle of champagne and three glasses to toast Holmes's return, but no such chummy scene in the Canon exists. Holmes and Watson were no cronies of the landlady, no matter how much affection they may have had for her. Perhaps the relationships between Holmes, Watson and Mrs. Hudson were governed more by Victorian class and social mores and gender politics than we care to think about. "The Man With the Twisted Lip" ends with Holmes saying, "I think, Watson, that if we drive to Baker Street we shall just be in time for breakfast." After spending several days at Neville St. Clair's home, The Cedars in Lee, Kent, Holmes expects to arrive at 221B unannounced, with Watson in tow, and get a hot cooked meal. The relationship is one of service provider and consumer, with "breakfast" being the closest thing to an acknowldgement of Mrs. Hudson and her role.

It is, then, the Sherlockian scholars, the pasticheurs, the writers of plays and screenplays, and the generation of readers who bring Mrs. Hudson into the inner circle of Baker Street life, who give the blank slate Watson presents us with any sort of detail. For indeed, "Mrs. Hudson, the landlady of Sherlock Holmes, was a long-suffering woman." She not only had to put up with "the very worst tenant in London" but a physician, who, in his writings, treated her like an extra in her own house.