"I Knew the Game Was in My Own Hands" [STUD]


I was recently notified of a new promotion for the upcoming film Sherlock Holmes, which integrates the social networking site Facebook as part of a game. Hey, while we're at it, please consider becoming a fan of the Baker Street Blog on Facebook.
According to Adverblog, if you go to the game website (the conveniently chosen URL is www.221b.sh), you'll have an opportunity to sign up and "hire" a Facebook friend to help you out as Watson and start playing. The underlying text reads:

"When the game begins, every Holmes needs his Watson - who will be yours? Sign up today to play 221B and unravel the mystery to play the most exciting game this year." 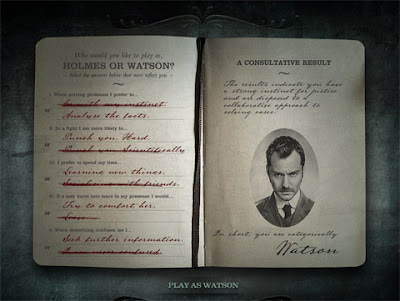 However, I just visited the site and discovered that they must still be working out the final details, as I get the message: "We are readying ourselves. We suggest you follow a similar course of action and return here shortly."
Should be pretty interesting. I'll try to keep up with the developments. In the meantime, you might consider becoming a fan of the movie on Facebook as well: http://facebook.com/SherlockHolmes.
UPDATE:
Since publishing the post this morning, the site has gone live. Here's a shot of what it looks like now: 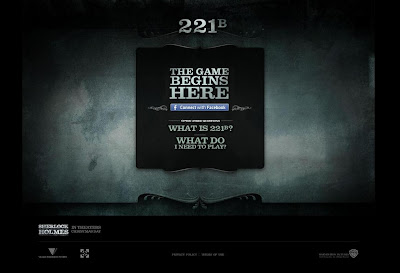 You're then asked to choose which character you'd like to be: 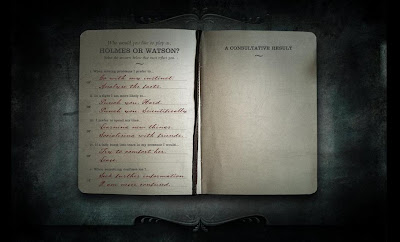 In order to determine whether you're Holmes or Watson, you'll need to answer these qusetions:

1. When solving problems, I prefer to:
a) Go with my instinct.
b) Analyze the facts.
2. In a fight, I am more likely to:
a) Punch you. Hard.
b) Punch you. Scientifically.
3. I prefer to spend my time:
a) Learning new things.
b) Socializing with friends.
4. If a lady burst into tears in my presence I would...
a) Try to comfort her.
b) Leave.
5. When something confuses me, I
a) Seek further information.
b) I am never confused. 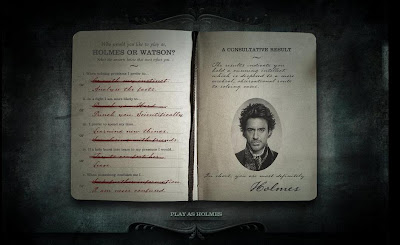 Then you're given an opportunity to choose your partner - for Watson, the site suggestions "someone on whom you can thoroughly rely." 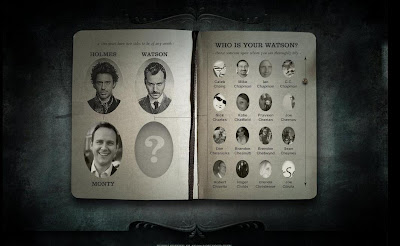 There is an FAQ about the game available here and reprinted below for your convenience:

What is 221b?
221B is a two-player game immersing you into the world of Sherlock Holmes and Dr.John Watson. 221B takes you through the events leading up to the very first scene of the new Sherlock Holmes film.

How do I play?
You can play with a friend, one as Holmes, one as Watson, or you can even play alone if you like, taking on the role of both characters. Just as in the stories, you and your friend will investigate crimes, sift through evidence and solve mysteries. You'll also have to stake your reputation as detectives on your deductions. Get them right and you'll soon be the envy of Scotland Yard.

What does the game look like?
The game is played through an ordinary internet browser, which we recommend setting to full screen(F11 will toggle fullscreen on and off). It's no ordinary web game - as you'll discover when you sign up, it's a rich audiovisual experience. There are two main areas: an interactive window, and a casebook, which stores all the evidence that you discover as you progress.

How do I sign up?
You'll need a Facebook account to play the game. There is a registration process which uses the Facebook Connect system to link you with a friend, so that you can start playing.

What will I have to do?
The most important thing you have to do is work together. You can't solve the mysteries unless you and your partner share information and ideas. Practically speaking, you'll be...
- reading evidence - witness statements, newspaper reports, letters - that unfold the mystery
- observing key characters - Inspector Lestrade and others appear at the start and end of each chapter, to share important things with you
- investigating locations in the game and collecting evidence you find there
- interviewing characters who you meet in the game
- chasing suspects, breaking into secure locations, and following trails.

Will I have time to do all of this?
221B is designed for busy people so the game fits around your life, not the other way around. If you get stuck, or if you just want to hurry up and find out what happens next, then there is always a way to take a shortcut and move on. Much of the game is designed in bite-size chunks, so you'll always be able to play on a little, even if you only have a short break.

How long does the whole thing take?
The game is played out in a prologue and eight chapters, each with its own mystery to solve. You will be notified by email when each new chapter is available. Once a chapter has launched, you can complete it as fast or as slow as you like. How long it takes depends on how serious you are as detectives. If you read every piece of evidence carefully, sift through all the options, and talk a lot, it might take you a couple of hours to play through the most complex chapter. If you get the game to help you a lot, and bust through everything at high speed, then around half an hour.

Does it matter if I miss a week?
Not at all! The game remembers how far you've got so that if you take a break from the game you can just pick up where you left off. If you start later than other people or fall behind, you can play through all the chapters that have been released until you catch up with the group.

Should I play as Holmes or Watson?
In the original stories by Arthur Conan Doyle - and in the movie - Watson is a man of action and intelligence. Holmes relies on him for many things. The game reflects Holmes and Watson's magnificent partnership; both players have a great deal to accomplish, and one cannot succeed without the other.

There are different journeys for both detectives - when you sign up to the game, you'll be quizzed as to which one we think you should play. But don't take our word for it - read the stories, talk to your partner, and decide for yourself.

Who should I choose to play this game with?
Someone who you like talking to, preferably, as you're going to need to share a lot with your partner to solve the mysteries. As the game is played online, they can be from anywhere in world.

The friend I signed up to play is out of contact for a week or two. What can I do?
You can either:
- wait for them to come back and pick up where you left off,
- kick them out of the partnership and carry on alone or,
- sign up another friend to play on with. It's up to you.

What technology do I need to play this game?
To complete the 221B experience you'll need: Microsoft Silverlight, Facebook Connect and Flash. When you sign up to the game, we'll offer you a one-off download for everything you need.

Are you going to spam my Facebook status updates like certain other games I've played before?
No. You will be able to share your sleuthing exploits with your Facebook friends, but it's always your choice. We will never automatically update your newsfeed from the game.

Personally, I think this is an extremely creative and engaging way to promote the movie - and more importantly - to welcome Mr. Sherlock Holmes to the 21st century. I hope those who are connected via the Web get a chance to see what we bibliophilic Sherlockians have been raving about for many years.
Oh, and my Watson? Thoroughly reliable. And he's got a mustache - even if it does make him look more like Poirot. :-) 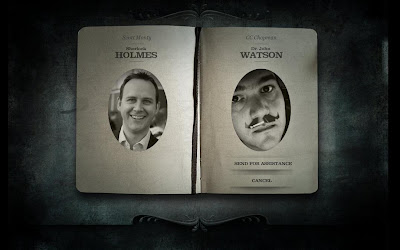