"Back to London Again!" [HOUN] 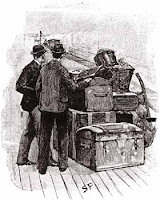 Part of the allure of the Sherlock Holmes stories is how Conan Doyle managed to fuse his writings with the city and countryside that was familiar to his readers. More than creating real, sympathetic, and heroic characters that Strand Magazine readers could envision, Doyle placed them in locations that were well known and familiar, thus setting the stage for a melding of reality and fiction that's sometimes difficult to discern even to this day.
Over at the Londonist, they've mapped out all of the London locations in the stories and created a custom map to show and describe each one. According to the map, there are 206 locations marked, including:
- 3 Pinchin Lane - where Watson collected Tobey [SIGN]
- 7 Pope's Court - the location of the Red-Headed League [REDH]
- Alpha Inn - the location of the "goose club" [BLUE]

And they note what each marker signifies:
Key: Green = precise location; red = imprecise location; purple = real-world Holmes-related sites; blue line = route taken by Holmes. Page numbers refer to those in the Folio Society edition.
Another interesting resource is from Google Books, which has taken the locations mentioned in The Complete Sherlock Holmes (Volume 1)

and created a worldwide Google map at the bottom of the page.
For other reading related to this subject, you might check out In the Footsteps of Sherlock Holmes

and The Sherlock Holmes Walk