Early Footage of London in Colour 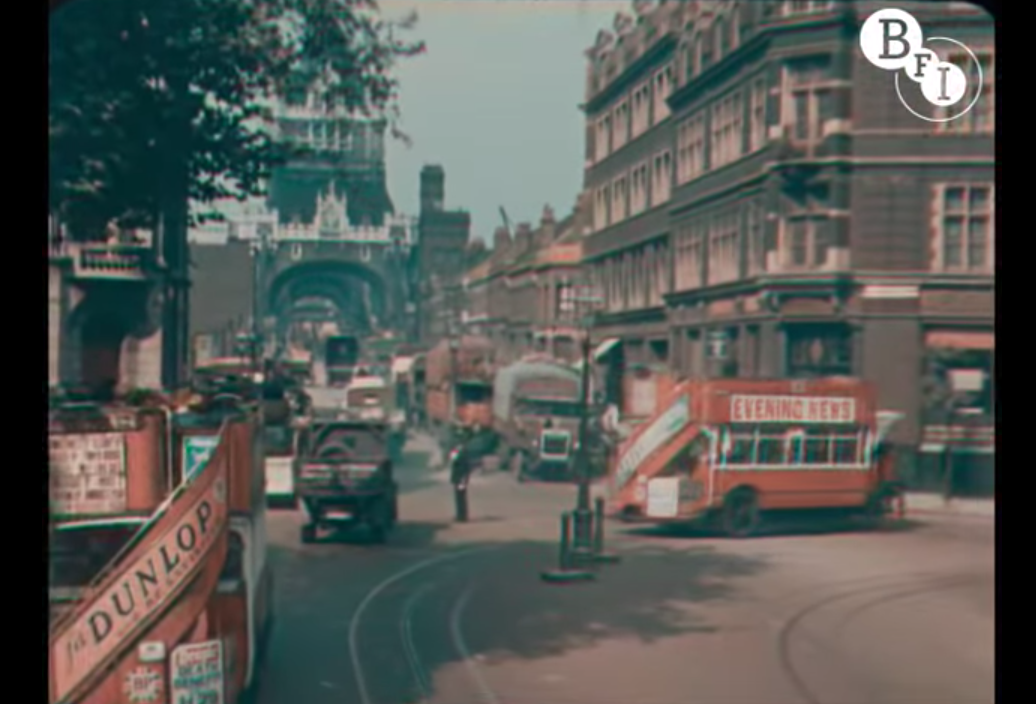 One of our favorite phrases as it relates to the Sherlock Holmes stories is from Edgar Smith's Editor's Gas-Lamp in an early issue of the Baker Street Journal in which he wrote:

We love the times in which he lived, of course, the half-remembered, half-forgotten times of snug Victorian illusion, of gaslit comfort and contentment, of perfect dignity and grace. And we love the place: the England of those times, fat with the fruits of her achievements, but strong and daring still with the spirit of imperial adventure.

Here then is a remarkable piece of video footage from 1927 - the year the last Sherlock Holmes story was first published - taking us on a tour through London in colour. What's particularly striking to me is that despite the obviously dated vehicles in the film, this is footage that could have been shot yesterday, as the buildings, uniforms, and daily activities of its inhabitants are all very much the same.

London is the last stop in an epic trip across Britain filmed in remarkable early colour.

London was the final stop in a marathon journey around Britain filmed as a series of cinema travelogues. Pioneering filmmaker Claude Friese-Greene brought these picture-postcard scenes to life with a specially-devised colour film process.

Great fun seeing that film. And thanks so much for resuming these regular blogs -- they're terrific!

Lovely to see London full od 1920s vehicles, and a periodic glimpse of industrial smoke in the air -- both of which are gone now (except for the motorcars at Coys of Kensington). Thanks for finding this for us. Much appreciated.

Wow! It looks like London of 1895 might have been a real place, after all. Wonderful, vivid images like these make it seem so much more alive.

We love the Sherlock saga because it is indeed a place "before the world went all awry," where there seemed to be rules, where we were not subject to imminent extinction by one nuclear bomb. Some control over our life was there- at least in our imagination. If you ever read Basil Rathbone's story of meeting a "ghostly Dr. Watson" in a New York park after the Rathbone play went south, you have a flavor of a world where moderate self-control and courtesy prevented the excesses of today. Imperfect and not fairly representative of the working class perhaps, but like all illusions-- or better said memories of a better time-- we remember the good and forget the bad. Do read Rathbone's article. Great feeling for a time and place. Would that more people were like the Dr. Watson of that era, where "England is England yet, and it is always 1895." (all quotes are from memory only). P.S. Great video that looked remarkably clean- no modern day litter that I saw. Thanks!!

Delightful film. Insightful in terms of a social documentary and of the colour process of its time.

Fascinating seeing the changes of this London and the London I move in today. The Thames embankments are now corridors of high rise buildings which now dwarf the Tower. (The Beefeaters have changed in having admitted the first woman Beefeater. Three of her colleagues were up before the beak recently for harassment. They object to females joining their ranks). Other strikingly notable differences are how few private cars there are on the roads. Plenty of cabs here (and of course the London underground was then a transport hub). But it seems most people would have made their ways around London in the evidently numerous open topped omnibuses - even then in cheery London red.
(Jane)