"An Exact Knowledge of London" [REDH]

Everyone seems to be capitalizing on the press around the new Sherlock Holmes film. There's nothing wrong with that; as Holmes himself once said, "The Press, Watson, is a most valuable institution, if you only know how to use it." [SIXN]
In that case, Holmes and Watson turned to the very victim of a crime for coverage - Horace Harker was a member of the Central Press Syndicate, and a murder was committed on his very doorstep. Holmes used that opportunity to have Mr. Harker write up a sensational piece about the murder, instructing Lestrade:

"Tell him from me that I have quite made up my mind, and that it is certain that a dangerous homicidal lunatic with Napoleonic delusions was in his house last night. It will be useful for his article."

The result was a piece that ran exactly as Holmes predicted, giving the suspect a false sense of security and thus luring him into striking again.
This time around, it's VisitBritain, Britain's national tourism agency. They've cleverly designed a really nice site that highlights locations around the U.K. which were used in the filming of Guy Ritchie's soon to be released cinematic marvel. 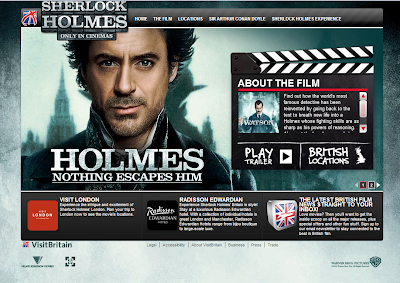 The sites that are on the list include: St. Paul's Cathedral, Albert Docks, Manchester Town Hall, Brompton Cemetery, Freemasons Hall, and the Royal Naval dockyard. In addition to those locations, there are a number of other locations that have Canonical connections as well - including filming locations of "The Greek Interpreter," "The Abbey Grange," "The Speckled Band," and more (can you match the manor house / estate to the TV film?). The site is definitely worth checking out.
And you can even book yourself at the Radisson Edwardian Hotel - although I'm sure you get more modern amenities as part of the experience.
In addition to providing a little extra attention to our literary interests, this movie may spur some additional tourism money being spread around. Not bad, given the current state of the economy. And bravo to VisitBritain for being so on top of things!
What are those four-letter abbreviations in the headlines?
11/18/2009 07:23:00 AM
blog, movie, Multimedia, travel