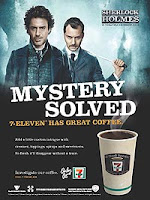 Just when you thought the marketing of the new Sherlock Holmes film couldn't get any more deeply woven into our daily grid, comes news of another tie-in, but this time from an unlikely source: the chain of 7-Eleven convenience stores.
Karl Greenberg of MediaPost's MarketingDaily reports on the 'elementary' cross-promotion, including in-store elements and a social media portion - the Facebook game mentioned previously here.
From the food and beverage area inside the stores to the fuel pumps outside, the images of Robert Downey Jr. as Holmes and Jude Law as Watson will be watching patrons' every step. Clever (ahem) phrases will be strewn about, such as "Hunger Solved," "Killer Duo," "It's No Mystery," "Grab Our Killer Deal" and "Get a Clue," will promote various food and beverage sales.

According to Greenberg, "the branded coffee-cup sleeves contain a clue and the URL to the 7-Eleven microsite, wherein players who successfully complete a fingerprint-matching game will get clues to a mystery, the solution of which offers up the film's opening scene and a hint to the 7-Eleven promotional partnership with Warner Bros. Pictures."
One interesting side-note: one of the clues to the game is a vintage newspaper that features a front-page ad for "Joe C. Thompson's Coffee Emporium - Open from 7 a.m. to 11 p.m." One Mr. Joe C. Thompson Jr. founded The Southland Ice Company in 1927, which later went on to become none other than 7-Eleven.
You can see my other posts on the interactive game here:
"The Game's Afoot" [ABBE]
"I Knew the Game Was in My Own Hands" [STUD]
And all coverage of the movie on this blog can be found by clicking here.