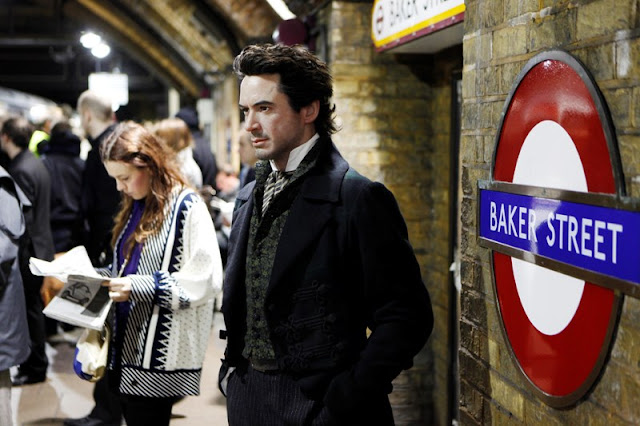 News today comes from London that Madam Tussaud's, the famous emporium of wax figures that is just steps away from Sherlock Holmes' residence on Baker Street, will unveil a statue of Robert Downey, Jr. as Holmes this holiday season to coincide with the release of the new film.

Madame Tussauds Studios London has been making wax figures for over 150 years. Each masterpiece takes four months, and a team of 20 dedicated sculptors, to create. According to the release, the wax figure will be revealed on Boxing Day. The creative team used information and over 300 precise measurements gathered at a sitting with Downey Jr. in Los Angeles and cost £150,000 to create.

This updated Holmes, according to Madam Tussaud's, is a "strikingly modern image created for the film, with a penetrating stare, tousled hair and dapper black and grey suit, waistcoat and cravat." Because we all know how Holmes is known for his tousled hair. ;-)

For those of you in London for the holidays, you can pre-order your tickets. Prices to Madame Tussauds are from £12.50 for adults and children (4-15 inclusive) when you pre-book at www.madametussauds.com/London. Priority access tickets can also be booked on 0871 894 3000.

For a range of photos of the figure out and about, see our Flickr album.