Quartering in the Fifties: The 2006 Baker Street Journal Christmas Annual

“It is always a joy to meet an American, Mr. Moulton, for I am one of those who believe that the folly of a monarch and the blundering of a minister in far-gone years will not prevent our children from being some day citizens of the same world-wide country under a flag which shall be a quartering of the Union Jack with the Stars and Stripes." 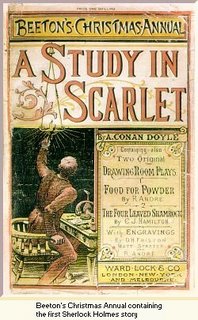 This year's Baker Street Journal Christmas Annual takes great pleasure in showing how that idea was put into action almost half a century ago.

Nicholas Utechin, editor of The Sherlock Holmes Journal, has had unique access to the correspondence of the late Colin Prestige - a founding member of the Sherlock Holmes Society of London with a distinguished quartet of American Holmesians: Nathan L. Bengis, Jay Finley Christ, James Montgomery, and Edgar W. Smith. Their letter show a sometimes bewildering enthusiasm for selling, collecting, and, above all, sharing when a trans-Atlantic Sherlockian camaraderie was being formed in the mid-1950s. Prestige left his Sherlockian collection to his alma mater - Oriel College, Oxford - and it is with their persmission that these letters have been made available for both this publication and eventual bedding-down in the BSI Archives at Harvard's Hougton Library.

Quartering in the Fifties provides a rare glimpse back to the years when, despite the fewer participants, the hobby of Sherlock Holmes was just as vibrant as it is today, with truly archival baggage attached.