"I Will Examine Your Symptoms..." [DYIN]

There have been a number of theories thrown around with regard to the mental health of Sherlock Holmes over the years. Those include such diagnoses as biopolar disorder, autism, attention deficit hyperactivity disorder, and most recently, Asperger's syndrome.

I've previously blogged about Holmesian influence in House. It should come as no surprise then, that in a recent episode ("Lines in the Sand"), Wilson noted symptoms of Asperger's syndrome in an effort to explain House's quirks:

"Asperger's syndrome is a mild and rare form of autism. It is typically characterized by difficulty establishing friendships and playing with peers, trouble accepting conventional social rules, and they dislike any change in setting or routine. "

But one positive side to Asperger's syndrome is the degree of creativity which is afforded to many of its sufferers. I happened to find a book review in the September 27, 2006 issue of JAMA (296:12, 1532) [subscription required]. The review was for The Genesis of Artistic Creativity: Asperger's Syndrome and the Arts

by Michael Fitzgerald, which focuses on artistic geniuses in the field of philosophy, literature, music and art. An excerpt from the review:

"...available data support the commonsense view that gifted people are different, in ways both rewarding and burdensome...the manic intensity and looser mental associations of bipolar disorder may lend afflicted writers emotional depth and a wellspring of metaphor but at a cost of high rates of suicide, depression, and substance abuse.

"With this in mind, the premise of Michael Fitzgerald's worthy new book is unexpected and counterintuitive: people with high-functioning autism, or Asperger's syndrome, may be highly creative. Those affected by Asperger's...are typically rigid and literal-minded, often display ineptitude in social relations, particularly nonverbal communication, and may lack empathy and insight. 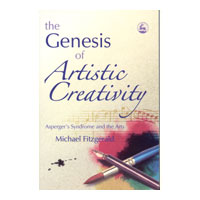 "Patients with high-functioning autism have several traits that may be major assets to a creative mind. They have a narrow range of interests, which they pursue with workaholic zeal and single-minded concentration. Their social maladjustment and dissatisfaction may be a powerful stimulus to fantasy and imagination. They may have isolated savant-level abilities in music, mathematics, language, or art. Finally, their scant regard for the opinion of others can be a big plus for an original creative genius, helping them persevere in the in the face of failure, rejection, or mockery....

"One suspects that because writers general need great resources of empathy and insight into character and motivation, they are less likely to have Asperger's syndrome than creative minds in other fields. There are some notable exceptions: one compelling chapter analyzes the career of Arthur Conan Doyle as a writer with Asperger's syndrome and suggests that Sherlock Holmes was an autistic detective."

One simply has to call to mind Holmes' hyperfocus, such as skipping meals while consumed with cases, or the thought of Doyle writing the stories on a crowded train or at a cricket match, to appreciate the diagnosis.
10/13/2006 01:02:00 AM
blog, books

" ... one compelling chapter analyzes the career of Arthur Conan Doyle as a writer with Asperger's syndrome ... " I don't recall anyone suggesting before that Conan Doyle was autistic. Or am I misreading here?

I didn't say there was such a suggestion. If you follow the link to "autism" in the first paragraph, it's about Holmes being considered autistic.

I did. It's concerned with Asperger's syndrome, not autism per se.

OK. You're right; I read it wrong.
This calls for fewer 14-hour days.