"Light a Cigar and Let Me Expound." [BOSC]

The book centers around the murder of a very real Mary Rogers, a woman of striking good looks who was hired to stand behind the cigar counter to attract men. Poe became interested in teh mystery and assigned the fictional Auguste Dupin to the case. 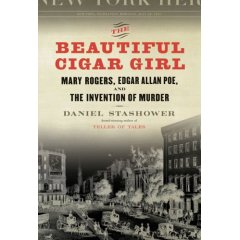 It sounds as if Mary Rogers was the Paris Hilton of her day. Stashower writes: "she was the first woman in New York to be famous for being talked about," and quotes a contemporary newspaper article that noted "Her notoriety is unencumbered by position or achievement." Sounds like Paris Hilton to me.

One excerpt from the book review:

"Mr. Stashower invests this high-wire act — a near disaster, as it turned out — with the same air of suspense as the murder investigation itself."

For those of you who may not be familiar with Daniel Stashower, he is a member of the Baker Street Irregulars, receiving his investiture "Thurston" in 2001. I had the good fortune to be staying in the same non-Algonquin hotel with Dan that year, and we toddled into Times Square together to get a cab. In true New York style, a limo driver offered us a flat-rate to the Union League Club. Bonded by this experience, we were linked further still by each receiving an investiture in the BSI that very night.

His previous works, Teller of Tales: The Life of Arthur Conan Doyle,

The Boy Genius and the Mogul: The Untold Story of Television,

You can listen to an interview with Daniel Stashower about _The Beautiful Cigar Girl_ from "It's a Mystery" at: