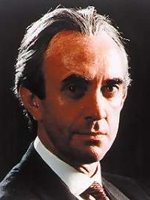 The Stage features an article mentioning that Jonathan Pryce and Bill Paterson will star in a BBC1 two-part drama about Sherlock Holmes "based on an original Sherlock Holmes mystery and has been adapted by Richard Kurti and Bev Doyle." [It's good to know they've managed to retain a Doyle as a writer.]