Christies in London is holding an auction titled Modern First Editions Including Books From the Library of Lady Ottoline Morrell. Of particular interest to readers of the Baker Street Blog are 35 lots of first editions by Sir Arthur Conan Doyle.

Sale 4074 includes some notable works, including:
The Memoirs of Sherlock Holmes Micah Clarke A three-volume set of The White Company 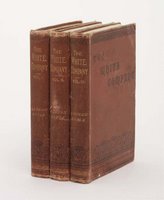 The auction also includes The Land of Mist, Uncle Bernac, The Adventures of Sherlock Holmes, The Doings of Raffles Haw, Rodney Stone, The Stark Munro Letters, The Refugees, a number of copies of The Hound of the Baskervilles... Check out the auction to see what's there.

Although estimates have been listed in the hundreds of pounds, I think the final prices will be significantly higher. These are mostly seminal works which will command a good deal of attention from collectors.