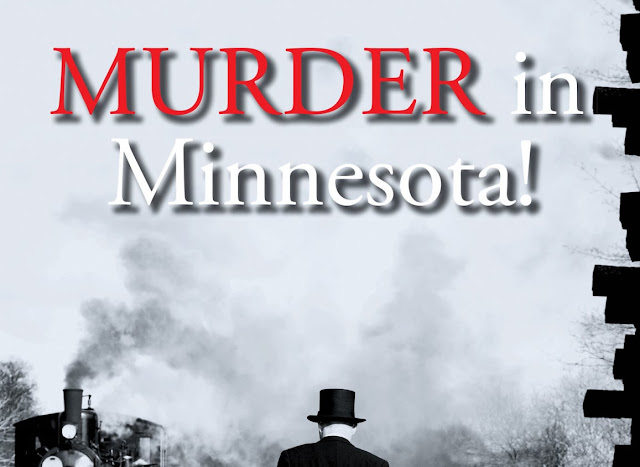 Several years ago, I saw author Pete Hautman speak at a Young Adult Writer's conference in Denver. Hautman explained to the crowd that when he submitted his book How to Steal a Car to his agent, his agent was surprised that Pete had written a young adult novel. The agent explained to the author that it was young adult because it had a fifteen year-old protagonist. Hautman replied that he just wrote a book. He didn't intend for it to be considered "young adult" in nature.

The same could be said for Jeff Falkingham's excellent Murder in Minnesota! a book combining two of his Sherlock Holmes adventures and both with the same narrator, Petey Smith who is 12 years old in the first story and then 22 in the second.  The stories are well researched, capture the local flavor of life in both small towns and cities in late 19th century Minnesota, and are excellent Sherlock Holmes mysteries. For those who don't mind seeing the great detective outside of England, this is a must have collection.

The first adventure, Sherlock Holmes and the County Courthouse Caper, takes place in 1886 when Holmes helps solve a series of grisly murders in The Minnesota River Valley.  The narrator of this adventure is 12 year old Petey Smith who, along with his family, befriends Holmes.

Petey makes for a fun narrator, giving us a child's eye view of a complex mystery. Imagine if Wiggins had narrated part of The Sign of the Four, and you get an idea of the tone for this book. Falkingham does a particularly good job of blending in historical facts about Minnesota and includes an authentic historic railroad map of Western Minnesota which is important to the story.  Falkingham also has good knowledge of Sherlock Holmes lore. Fans of Baring-Gould's take on Holmes will know why Holmes was in America in 1886.

I only caution that the murder victims in the book are described in savage detail and may be disturbing for sensitive young readers. I'd give the book a PG-13 rating, definitely okay for teenagers, but may be too intense for tweens.


The second adventure, Sherlock Holmes: In Search of the Source takes place ten years after the Courthouse Caper. Petey is still the narrator, but he is older, on the verge of getting married. The mystery of this adventure involves a murder committed at the Schutte building, a boarding house in St. Paul. This story feels much more like a traditional Holmes adventure.

Petey, at age 22, sounds much more like a young Watson, and the adventure plays out more like a typical Doyle story with grumbling police, a mysterious man following Holmes, and Petey telling the reader of Holmes's incredible skills of deduction. Falkingham also keeps up with blending in his historical facts about Minnesota into the narrative.

We learn that St. Paul could have been named Pig's Eye if fate had taken a different turn, and much about the beer barons in the St. Paul area. My only complaint with this story is that at times I felt that the historic information got in the way of the narrative and the story was a little padded. That is a minor quibble, and I would still give this adventure five stars.


For those of you who don't mind reading Sherlock Holmes adventures away from the foggy streets of London and sans Watson as narrator, Murder in Minnesota! is a book for you. Falkingham is a talented writer, and I hope he writes more Holmes adventures with Petey Smith. After all, there is plenty of time in the twentieth century when Holmes could have returned to Minnesota.

Jeff Falkingham has been a fan of Sherlock Holmes since he first saw Peter Cushing in The Hound of the Baskervilles​ (1959). Besides writing two pastiches about Holmes, Jeff has created a program that has drawn rave reviews at more than 90 libraries, schools, historical societies and social clubs and book clubs across Minnesota and its neighboring states. He will be appearing  at the the triennial Holmes conference in Minneapolis August 8-11. Visit him at his Dealer's Table.


Episode 166: Dark Places, Wicked Companions, and Strange Experiences is a look at the upcoming Minnesota conference.