The Curious Case of the New Yorker Cover 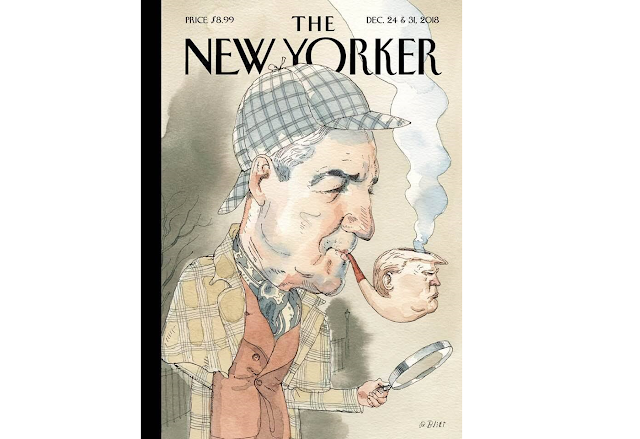 The 2018 year-end issue of The New Yorker caught the attention of many people. But Sherlockians in particular were alerted to the presence of Sherlock Holmes in the form of Special Counsel Robert Mueller.

It's not often that Sherlock Holmes graces the cover of a magazine, and certainly not one of the stature of The New Yorker. And as you would imagine, that brought out the most avid collector of Sherlockian art that we know: Jerry Margolin, BSI ("Hilton Cubitt").

Jerry joined us way back on Episode 16 of I Hear of Sherlock Everywhere to share his stories about his considerable art collection. And he shared his Christmas card tradition with us as well.

We caught up with Jerry to follow his pursuit of the original art from the cover of The New Yorker.

How did you first hear about this cover?

It was posted on Facebook. Somebody posted the cover long before it came out, so I don't know where they got the advance of the cover from. But as soon as I saw it, I showed it to [my wife] Saint Judy and said, "Gee, I've got to try and go after this. "

Not an unheard of situation for you. You see Sherlockian art come around all the time and you manage to track down the artists, whether you know them or not. How do you do it? What's your first step in something like that?

Well, it's of course a lot easier now with Google and websites and so on. Even better than it was when I had no internet many, many moons ago. But usually, most artists now have a website. (I'm giving away my trade secrets here.) I have a feeling everybody else knows this as well, but I'll Google it and hopefully a website comes up. And if it does, there's usually some type of contact, email or Facebook.  I go ahead and send them a message. I have a fairly standard message that I write to them. And I hope for the best that they'll write me back.

Who is this artist and how did you respond?

It's a gentleman named Barry Blitt and he apparently does quite a number of covers for The New Yorker and has for a while. So it took me a little longer than normal, about two days to get in touch with him and to find him and get in touch with him. And he wrote me back. I would much rather just pick up a phone and call somebody and speak to them directly. But finally he answered me and I asked him my basic question, "is the item available and how much does it cost?" and we go from there.

And what was his response? Was he surprised to hear from you?

He does sell his pieces—I don't know how frequently because his published pieces are amazingly expensive. He actually wouldn't quote me. He said, "I'm kind of embarrassed to quote you. What would you be willing to offer for it?" And I gave him what I thought was a very generous offer for it. I don't like to—usually you get one shot to make an offer. And I try sometimes to go overboard instead of undercutting it.

So I gave him what I thought was a very generous offer for what I thought the art would be worth to me. And it took a little while for him to get back to me, but when he did he said, "Well normally—and this is why I was embarrassed to say—normally I get between $5,000 and $10,000 for my published covers." I said, "That's not in my financial universe, so thanks very much." But he said,  "I'm neurotic enough that when I do a cover I send two, and they can choose which one they want to use."

So he said "I would be happy to sell you the alternate, which is fairly close to the other one." As a matter of fact, the inscription he gave me on the back of the art—because I always ask an artist to sign it on the front and then inscribe it to me on the back because my framer cuts a window in the back mat to show off these descriptions—on this one, he, he wrote:


"This is an alternate version of the artwork that appeared in The New Yorker 2018 year-end cover. (I think this is a better drawing, but what do I know?)"

So he actually thinks they picked the wrong cover.


As a Sherlockian art collector, having looked at both of them, which do you prefer?

Well, my preference, of course, no matter which one was better or not better would be, do have had the actual published cover. That said, I think except for a couple of little minor differences of an arm here or a hand there, and a little bit of difference in the patterns that he used for the deerstalker and Inverness, I think it's a toss up on these. I would have been happy with either one of them. I think they're both incredibly good and I'm very happy with the one that I wound up getting except for the minor detail that it isn't the final published cover. But I have a Frederic Dorr Steele that is not the final published version, and I'm happy that I have that one too.

I have done that in one or two cases. I'm looking at one now on my wall here where I did do that. Mostly what I'll do is frame the piece and then on the back in a mylar bag we'll attach the magazine to the back of the frame. It gets fairly large if you have to frame both together. And I just have no more wall space. I literally have no more wall space and that's why I'm not framing pretty much anything else. I just have nowhere to put it and it would just sit on the floor or somewhere. This one I I will hang when I get it framed. I'll find space for it, even if I have to remove something else from the wall.

I'm going to try and put it next to my Obama piece. I have the painting of the cover of The National Review. It was a painting Obama dressed as Holmes. I tracked down the artist. It's a magnificent, beautiful, full color piece. And I tracked down the artists, a gentleman named Ramon Guen and  asked if I could purchase the cover. And he said it was gone already. And I asked him, "Could you recreate it for me?"

So he said, "Yeah, I can do that." So he recreated it—and I'm talking down to the last pen stroke.

And that one, I framed and I have the magazine cover on the back of that one. I want to try and find space to put this when it's done next to Obama. 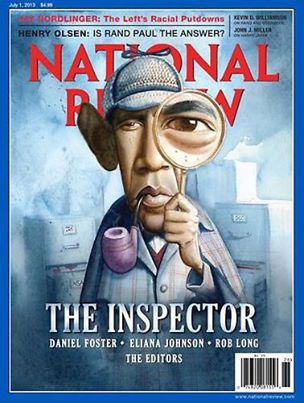 Do you see a lot of visual representations of Sherlock Holmes in the political realm?

Oh sure. As matter of fact, there were two recent cartoons. I just got two pieces from a phenomenal artist and political cartoonist—a Pulitzer Prize winner—named Mike Luckovitch. One is Holmes with "FBI" on his Inverness. He's holding a paper that says "Kavanaugh Allegations" and says, "Come Watson, we have a job to do." And off to the right is Trump holding a stopwatch and saying, "Time's up!"

The best part about all of this is how you make it a spectator sport for the rest of us.

Well, I'm, I'm glad if people enjoy it. I don't do it as a "Ooh, look at me, I've got this." I just want to share the stuff with people and I hope that they enjoy seeing some things that maybe they'll never get a chance to see.

One of those things of course, is the [original] Paget. I'm one of the very, very lucky people to have an original Paget. So usually when a Sherlockian visits, that's what they want to see the first time right when they get here. And I'm happy to show it. I still, after I've owned it now for going on almost 40 years I still stare at it and kind of pinch myself. Because back in my early collecting days, that was not even a dream. So to have actually have been able to do it is pretty amazing to me. Still after all these years.

Which Paget drawing is it?

It's from "The Resident Patient," of Holmes holding the cigar case sniffing the cigar. It is one of the more well known pieces. I'm happy to show this stuff to anybody, uh, that would like to make the trip to Portland to see it. If anybody does, they can contact me and if I'm home and going to be here and they're welcome to stop by.


Jerry's original Paget and many others can be found in The Complete Paget Portfolio from Wessex Press. We interviewed Nick Utechin, the book's editor, for Episode 156.

We thank Jerry for sharing his story with us.