"It was the one thing which suggested a Continental tour." [CREE] 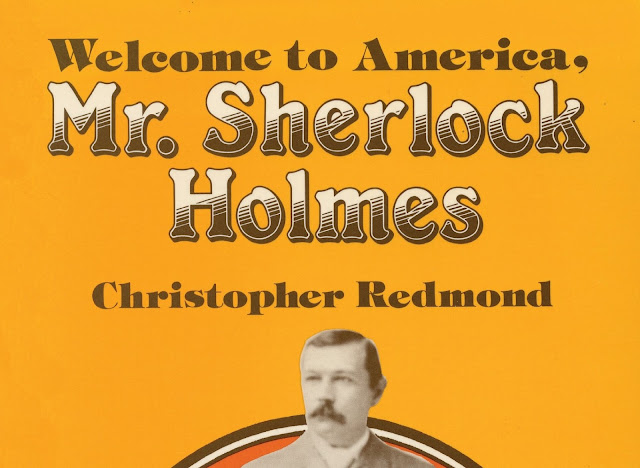 Remember that time when the creator of Sherlock Holmes played golf with Rudyard Kipling, spent an afternoon drinking with Indiana's greatest poet, and lost a collar-button moments before he had to go on stage?

Not all on the same day, of course, but all during the same ten-week adventure, Arthur Conan Doyle's 1894 lecture tour of North America. It came just months after Holmes's supposed death at the Reichenbach Falls, and at every stop, from Brattleboro to Milwaukee, Conan Doyle faced eager questions from reporters and the public: will there ever be more Sherlock Holmes stories for us?

In a free-for-all environment without copyright protection, American publishers had already started pirating ACD's early books, and after the tour they came out with dozens more editions, especially of The Sign of the Four.

Quite possibly these cheap editions, rife with typographical errors, and the publicity Conan Doyle generated during and after his tour did as much to make the detective a permanent giant of popular culture as did William Gillette's play five years later.

Because Conan Doyle lectured almost every night in a different city, Sherlockians across a quarter of the continent have a chance to stand where the great man once stood: New York, of course, and New Rochelle; Toronto and Niagara Falls; Philadelphia and Baltimore; Cincinnati and Toledo. One city at least already has a plaque marking Conan Doyle's stop there: Indianapolis, where the Illustrious Clients erected it in 1994.


The tour ran from early October to early December 1894, which means that its 125th anniversary will arrive in a few months, and there are ample opportunities for quasquicentenary celebrations.

More than 30 years ago, using detailed research in newspaper files and other contemporary sources, I reconstructed the day-to-day story of Conan Doyle's 1894 tour in the book Welcome to America, Mr. Sherlock Holmes, which was published in 1987 by Dundurn Press of Toronto. It was pleasantly received by Conan Doyle scholars at the time, but it has long been out of print.

I'm delighted to announce that Welcome to America is about to appear in a new edition published by Wildside Press. The 1987 chapters will be unchanged, as will the extensive source notes, and the reconstructed text of "Readings and Reminiscences," the lecture Conan Doyle gave to audiences in town after town.

There will be a new introduction pointing to some of the research that has been done since 1987 adding to scholars' knowledge of the 1894 tour, but that new material is not my work and will not be incorporated into the main narrative. I Hear of Sherlock Everywhere readers have already learned about one chapter in the book that needs correcting, the one describing Conan Doyle's visit to the grave of Edgar Allan Poe — a touching incident that probably never took place.

Please watch for announcements about Welcome to America, and look forward to reading about Conan Doyle's partying with the young athletes of Toledo, his testy remarks about anti-British sentiment in parts of the United States, his visit to Cooper's Cave at Glens Falls, and the six-year-old who whacked him in the head with a stuffed toy.