"I mean that I have earned the reward" [PRIO] 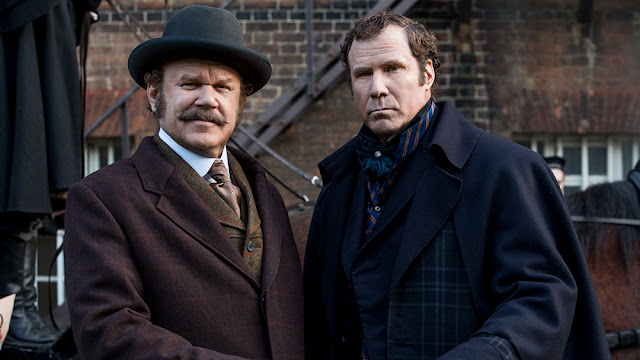 Award season is upon us and Sir Arthur Conan Doyle's most famous literary characters have, as has been the case during the past decade, been recognized once again as icons in cinematic popular culture.

From the 2010 Golden Globe Award winner in Best Performance by an Actor in a Motion Picture - Comedy or Musical (Robert Downey Jr.) and Teen Choice Awards winner Choice Movie Actress: Action Adventure (Rachel McAdams), to the many BAFTAs, Critics' Choice Television Awards and Emmys for which the BBC's Sherlock has been nominated and won, Sherlock Holmes, Dr. Watson and other Canonical figures remain bright in the public eye.

This year is no different as Doyle's distinguished detective duo are in prominent company. Their peers include Melissa McCarthy, Helen Mirren, Amanda Seyfried, John Travolta, Bruce Willis, and President Donald J. Trump. They're all nominees for the 2019 Razzie Awards.

The list of the Sherlockian-relevant nominations are as follows:

Neither Rebecca Hall nor Lauren Lapkus were nominated in the the Worst Actress/Worst Supporting Actress catagory, as they actually acquitted themselves admirably in the otherwise poorly written roles.

But that leads us to wonder why Etan Cohan wasn't nominated for Worst Screenplay. Surely the competition was not that tight. Putting Queen Victoria on board the Titanic alone should have earned the script a place in top five, never mind the revolting (and not in a funny way) take on the pottery scene from Ghost between Drs. Hart and Watson in the morgue.

Congratulations to all the nominees in keeping Sherlock Holmes and John Watson evergreen in popular culture. Any year that has two major Sherlock Holmes films released and garnering awards is a banner year for the Sherlockian hobby and I hope that 2019 does not disappoint.