The Curse of Doone — The Sincerest form of Flattery? 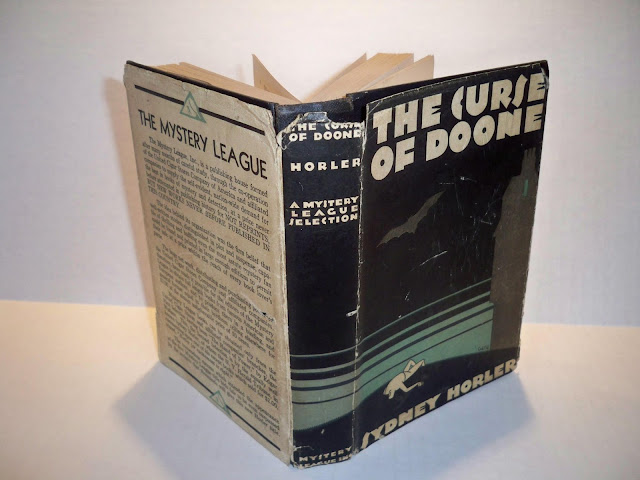 I have just been reading a thrilling novel set on Dartmoor, about mysterious doings in a lonely house with only candles and lamps to illuminate it, a house where the butler and his weeping wife are secretly providing food to a criminal on the run who happens to be a family member, a house that is the subject of many local legends about a monster, a curse.

And it isn't The Hound of the Baskervilles.

It's The Curse of Doone, by Sydney Horler, one of four novels he wrote in 1928 (and more than 150 that he churned out over a career of more than 30 years). I stumbled onto it by chance at a used-book sale a while back, and I would have guessed that it was utterly forgotten 90 years after its publication, but in fact it has two reviews on Goodreads, one of which warns that it's "a more laid back mystery with slower pacing than you may be used to."

Well, that's as may be. I'd say in fact that it is implausibly full of incident: fistfights, kidnappings, attacks by a vampire bat (which of course turns out to be bogus), car crashes, druggings, hypnotizings, disguises, break-ins, heart attacks, and cameo appearances by dullish police officers. There is also, as one might expect, a love affair, in which the heroic hero falls for the feminine female, kissing her only after she turns out to be the rightful owner of a golden treasure trove found in a deserted attic.

If it seems that the treasure business is reminiscent of The Sign of the Four, and the bat of "The Sussex Vampire," while pretty much everything else in the book suggests The Hound of the Baskervilles, that's only because I don't have the space to enumerate the book's other features, including the secret invention which will, rather like the Bruce-Partington submarine, render future warfare impossible within its operating radius. No wonder, then, that the German spies are frantic to gain possession of it (see also "His Last Bow"). It would be an understatement to say that the book was clearly heavily influenced by the tales of Sherlock Holmes.


The Curse of Doone, and I suspect most of Horler's other books, are firmly in a genre that is probably best known now for the Bulldog Drummond books by "Sapper." The central figures are upper-class young men who are rather at loose ends following their life-changing experiences in the First World War, and who join the secret service as Ian Heath does here, or dabble in espionage, or solve crimes that just happen to come their way. They are strikingly clean-cut and clean-living, they have no use for Germans (or, probably, Jews), they can find their way across country in pitch darkness, and their only vulnerability is to petite blonde girls in distress. One may see some of these traits, though not all of them, in the exploits of Dorothy Sayers' Lord Peter Wimsey, who is widely thought to have similarities to Sherlock Holmes a generation earlier.
Arthur Conan Doyle famously wrote fast — knocking off The Hound in a couple of months in 1901 — and is known for inconsistencies and plot holes, from Watson's wound to the impossible dates in "The Red-Headed League." One likes to think, however, that he would not have his heroine bound hand and foot at a climactic moment (like Beryl Stapleton) and nevertheless allow her to "stretch out her hands" to her tormentor, as Horler does. The best way to read this kind of material is fast — very fast.