"There are numerous small fry, but few who would handle so big an affair" [BRUC] 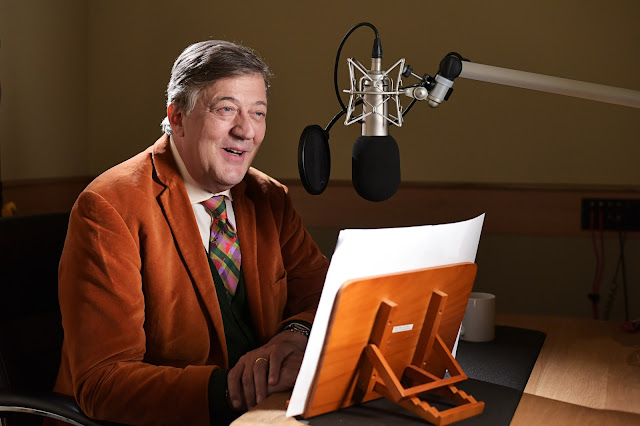 Stephen Fry is the new voice of the Sherlock Holmes stories.

Audible Studios, the parent company of Audible.com, contracted the actor, author and life-long Sherlock Holmes fan to read all 60 of the Sherlock Holmes stories in an audio format it is simply calling Sherlock Holmes. The collection was released by Audible on March 1 and is available at adbl.co/Holmes See the trailer below, from their Facebook page:

“I really do owe Holmes everything"

As a portrayer of Jeeves in the inimitable Jeeves and Wooster series from the early 1990s and of Mycroft Holmes in Sherlock Holmes: Game of Shadows, Fry has a keen understanding of the cerebral approach that these characters require. And he is clear that Conan Doyle's stories were an essential part of his own development as an author, screenwriter and storyteller:


“I think it was reading the Sherlock Holmes stories as a boy that first turned me on to the power of writing and storytelling. I felt myself inside the world of Baker Street, sitting alongside Holmes and Watson in their snug quarters, listening to a new case being told them by a new client. Now to be able to read those stories again, but this time out loud, is giving me more pleasure than ought to be allowed. A job of work really shouldn’t be so delightful.”


In addition to the actual stories themselves, Fry has written and narrated eight insightful, intimate and deeply personal introductions to the story collections. In fact, the introduction to the Memoirs taps into the current craze of superheroes in popular culture:

"Heroes with remarkable gifts are as in vogue now as they have been since they first appeared, perhaps even more in vogue. But although the very first one was launched in serial published form just like his masked and body-suited successors, it was not in DC or Marvel comic books that he made his appearance, rather it was in the sedate and respectable pages of Mrs Beeton’s Christmas Annual in the mid-Victorian year 1887."

"This caped crusader’s cape was made of finest British tweed. His magical gifts were not the ability to fly or X-ray vision – his superpower was that he had trained his mind into a uniquely powerful weapon which could solve mysteries, unmask the guilty and right wrongs."

Stephen Fry is no stranger to the Holmesian world, either. We chronicled his many qualifications, which included his support of the bequest of Richard Lancelyn Green to the city of Portsmouth and his narration of the BBC documentary "The Man Who Loved Sherlock Holmes." In fact, he has been a member of the Sherlock Holmes Society of London since his teenage years and presided over the Society's 2005 dinner.

Below are two excerpts from the stories, to give you a flavor of his narrative style: