Plan Your Stay at Wisteria Lodge

Have you ever wanted to stay at one of the homes mentioned in the Sherlock Holmes stories? You have your chance with Wisteria Lodge. Sir Arthur Conan Doyle disguised the names of a number of stately homes (Holmes?), many of which have been identified by scholars. David Hammer's For the Sake of the Game and The Game Is Afoot are two fine examples, and James Montgomery made a go of things in his 1955 Montgomery's Christmas Annual: A Case of Identity. Not to mention the multitude of efforts by various members of the Sherlock Holmes Society of London over the years.

But what about Wisteria Lodge? As usual, Sir Arthur Conan Doyle was up to no good with "The Adventure of Wisteria Lodge," beginning the story under false pretenses. Watson wrote that it was "a bleak and windy day towards the end of March in the year 1892."

We know that this is an impossibility, as Sherlock Holmes and Professor Moriarty battled at the Reichenbach Falls in April 1891, ending only as it could have: with the evil genius at the bottom of the cauldron and world's greatest detective embarking on what would become a three-year hiatus.

So we're already off on the wrong foot when Holmes shares a telegram from one John Scott Eccles, who says that he had a "grotesque" experience the night before at Wisteria Lodge, between Esher and Oxshott. He was invited there by Aloysius Garcia, who we later discover was looking to establish an alibi.

It's no wonder that the evening was grotesque when we begin with a description of the lodge:

"The house was a fair-sized one, standing back from the road, with a curving drive which was banked with high evergreen shrubs. It was an old, tumbledown building in a crazy state of disrepair. When the trap pulled up on the grass-grown drive in front of the blotched and weather-stained door, I had doubts as to my wisdom in visiting a man whom I knew so slightly."

The description didn't improve much when Holmes and Watson arrived on the scene:


"A cold and melancholy walk of a couple of miles brought us to a high wooden gate which opened into a gloomy avenue of chestnuts. The curved and shadowed drive led us to a low, dark house, pitch-black against a slate-coloured sky."

Well, you may be pleased to note that there is in fact a Wisteria Lodge in England that's available for rent. It's clearly not the same as the one in the story, as it's not nearly as gloomy, nor is it located in Surrey.

In fact, the modern-day Wisteria Lodge can be found further north, in the village of Harlaston, in Staffordshire (seen below in the interactive map - you can zoom in/out, scroll around). It's a lovely location, just 6 km from the National Memorial Arboretum, 145 km SE of Manchester, and 225 km NW of London.

Yes, it's in the middle of nowhere. But when "nowhere" includes the English countryside, you're in for a treat.

The site describes the surroundings thus:


"This quintessential English Village contains a Post Office/shop and also a lovely old Parish Church. The traditional local pub, The White Lion, is renowned for its good food and drink. Also, a laundry service (collection & delivery) is available in the village if required. The River Mease meanders in easy walking distance, for those who wish to enjoy a quiet riverside walk and the peace and tranquility of our English countryside. It is also a popular area for cycling and wildlife enthusiasts."


The accommodations are in the form of a quaint, newly refurbished detached character lodge set within the grounds of a period cottage, Holly Cottage. And as you can see, it lives up to its name: 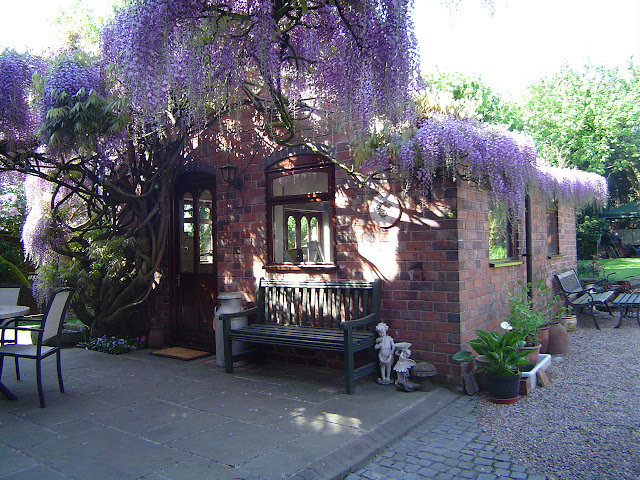 Guests can enjoy complete privacy and wake to the sounds of birds singing in the magnificent ancient Wisteria tree which surrounds the building and gives the Lodge its name. 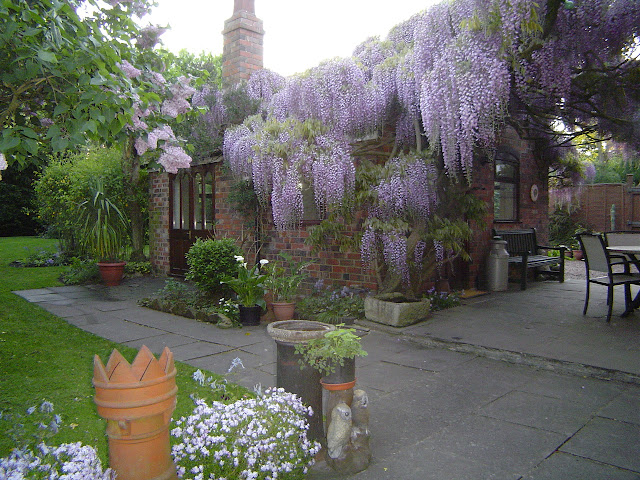 Patio doors open onto mature gardens, in a private setting. A bird feeder by the windows ensures a view of the amazing array of birds which visit the garden, including a tame blackbird who serenades from the Wisteria tree. 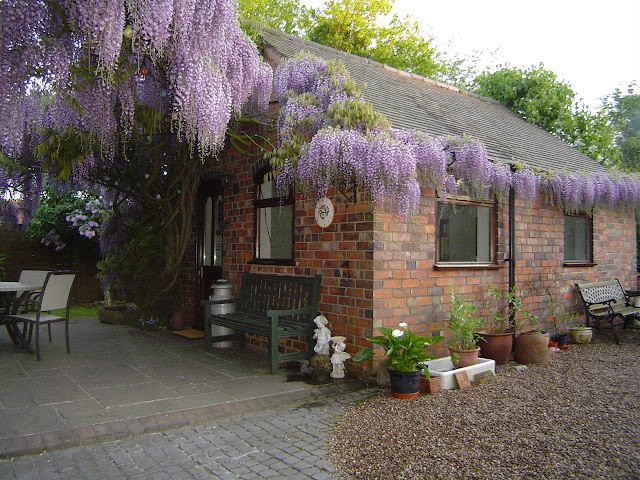 It is a self-contained unit idyllically set in tranquil gardens away from the main cottage. Inside you'll find a kitchenette where simple meals can be prepared, including a sink, refrigerator, microwave/grill, kettle, toaster, crockery and utensils. 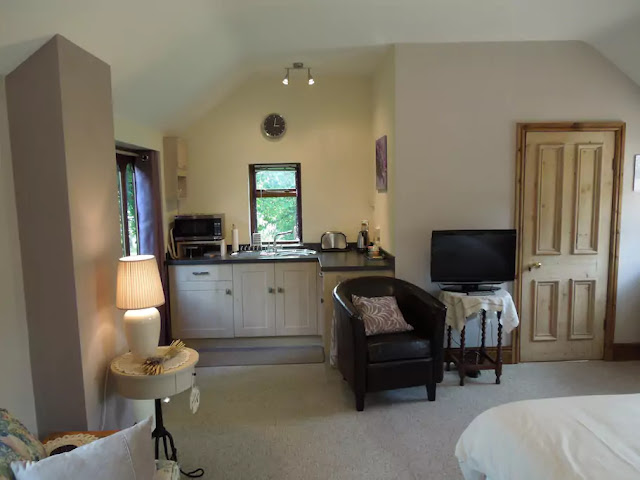 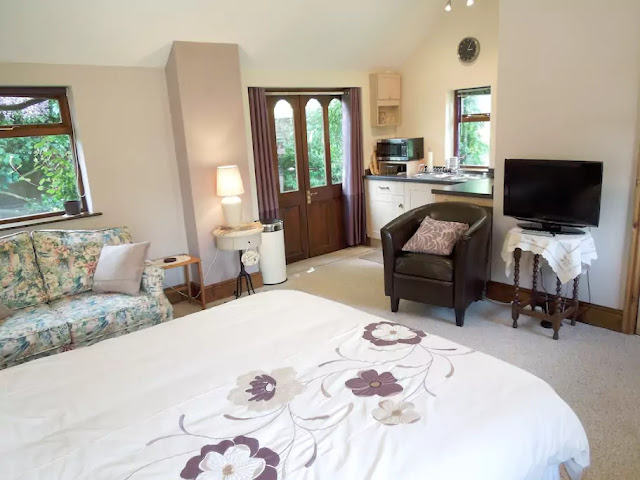 A king size bed, wardrobe, and bathroom with shower, toilet and sink round out the offering. 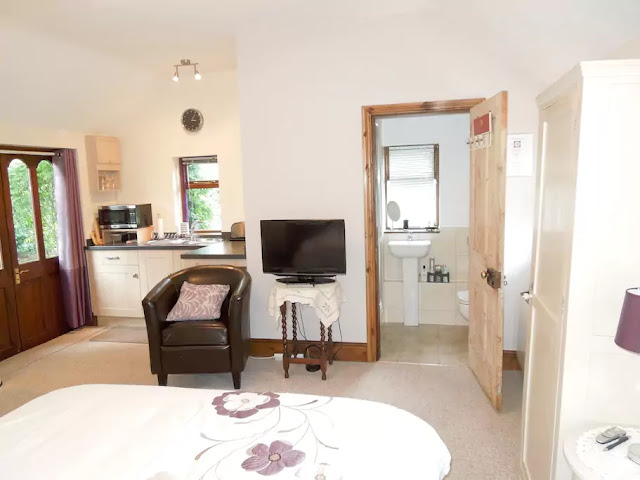 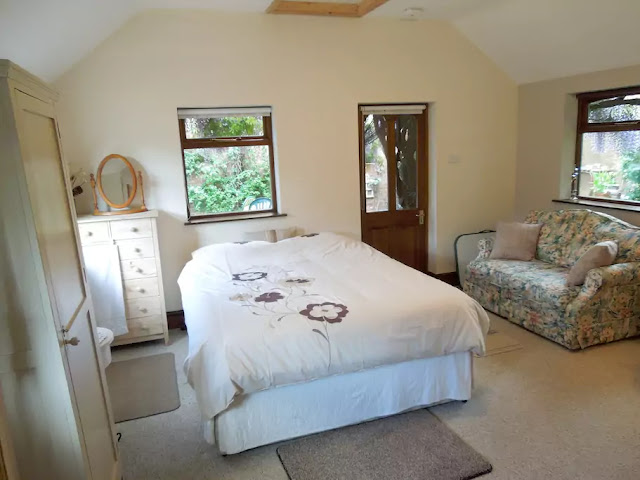 You can book directly on the Wisteria Lodge website, or through Airbnb.

Here's hoping your stay isn't interrupted by the Tiger of San Pedro.