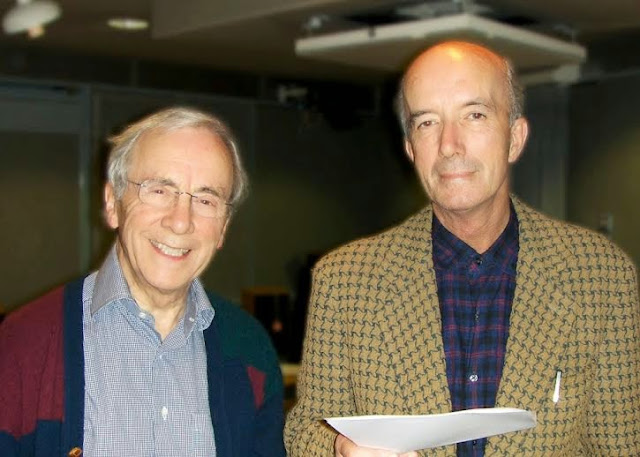 Actor Andrew Sachs passed away on November 23, aged 86. He was most well known for his role as Manuel, the hapless Spanish waiter in Fawlty Towers with John Cleese. But Sherlockians knew him for his turn as Dr. Watson on the radio plays on BBC.

Bert Coules, whom we interviewed on Episode 68 and Episode 69 (click for more), was the head writer for the series that dramatized the entire 60 stories of the Sherlock Holmes canon and starred Clive Merrison as Sherlock Holmes and Michael Williams as Dr. John Watson.

After Williams' death in 2001, the BBC green lit 16 more episodes, collected in The Further Adventures of Sherlock Holmes, which Coules wrote. At this point, Andrew Sachs had been selected to play Watson, but Coules was still under a confidentiality agreement when he spoke to Scarlet Street in an interview, as he recounts in his book 221 BBC:


"I can tell you that our new Watson is a well-known actor, most closely associated with one particular role (and one about as far removed from Dr. John H. Watson as it's possible to get) but with a very wide and varied career in stage, film, TV and radio, and experience as both a writer and director. He will bring exactly the same qualities to the part as did the late Michael Williams: a fine sense of intelligence and strength, a refusal to play second fiddle, a subtle humour and a great and long-suffering affection for Holmes."


Once Sachs took over the part, it was seamless, picking up perfectly from where Williams left off, yet bringing his own individuality to the role. According to Roger Johnson, BSI ("Pall Mall Gazette"), writing in Sherlock magazine:


"Sachs' Watson is quietly assured, thoughtful, courteously charming and wryly humorous... a self-confident man, modest and above all, likeable."


"I started out thinking of bumbling old Nigel Bruce but Patrick put me right. He told me 'Just say the words' - best advice ever."

And Bert Coules shares the story of the development of The Further Adventures series. The preceding link will place you directly at the point of the interview. Andrew Sachs begins at the 1:15:01 mark.

Or you can click on the embedded sound file below, beginning at the 1:09:08 mark (hover over one of those little IHOSE icons on the sound bar and click on it to go there):

We'll miss Andrew Sachs, but we're thankful that he'll remain with us forever. It's picked up in particular in "The Marlbourne Point Mystery," the final episode of The Further Adventures, as Merrison's Holmes answers Watson's question as to how such a thing would be possible:


"Because of your stories. Don't you see? It doesn't matter what happens here, in the real world. We're...more than reality, you and I. You, my friend, have made us immortal."