A Holiday Gif(t) from I Hear of Sherlock Everywhere

"on the twenty-second of December" [BLUE] 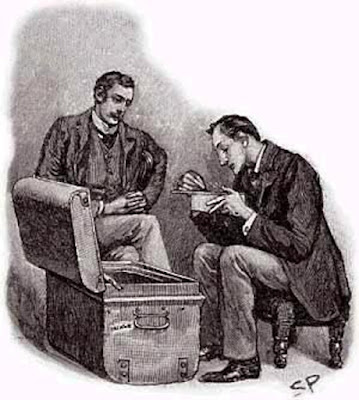 On this date in 1888/9, the famed Hotel Cosmopolitan jewel heist occurred. As it was chronicled in "The Adventure of the Blue Carbuncle":


"Hotel Cosmopolitan Jewel Robbery. John Horner, 26, plumber, was brought up upon the charge of having upon the 22nd inst. abstracted from the jewel-case of the Countess of Morcar the valuable gem known as the blue carbuncle. James Ryder, upper-attendant at the hotel, gave his evidence to the effect that he had shown Horner up to the dressing-room of the Countess of Morcar upon the day of the robbery, in order that he might solder the second bar of the grate, which was loose. He had remained with Horner some little time, but had finally been called away. On returning he found that Horner had disappeared, that the bureau had been forced open, and that the small morocco casket in which, as it afterwards transpired, the Countess was accustomed to keep her jewel, was lying empty upon the dressing-table. Ryder instantly gave the alarm, and Horner was arrested the same evening; but the stone could not be found either upon his person or in his rooms. Catherine Cusack, maid to the Countess, deposed to having heard Ryder's cry of dismay on discovering the robbery, and to having rushed into the room, where she found matters were as described by the last witness. Inspector Bradstreet, B Division, gave evidence as to the arrest of Horner, who struggled frantically, and protested his innocence in the strongest terms. Evidence of a previous conviction for robbery having been given against the prisoner, the magistrate refused to deal summarily with the offence, but referred it to the Assizes. Horner, who had shown signs of intense emotion during the proceedings, fainted away at the conclusion, and was carried out of court."

As this marks the beginning of the only Christmas story in the Sherlock Holmes canon, we thought it was appropriate to leave you with this gift for the holiday season: an animated GIF of "The Blue Carbuncle," lovingly reimagined as "The Bloo Sparkly" by the creator whorl, of the now-defunct site Holmesian.net.

(If you're scrolling down and the GIF has already started, simply refresh your browser to start over.)

Compliments of the season. May all your carbuncles be blue this holiday season. Thank you for spending at least part of 2016 with us.