Signed Letter from Conan Doyle Up for Auction

"at the Danish capital" [STUD] 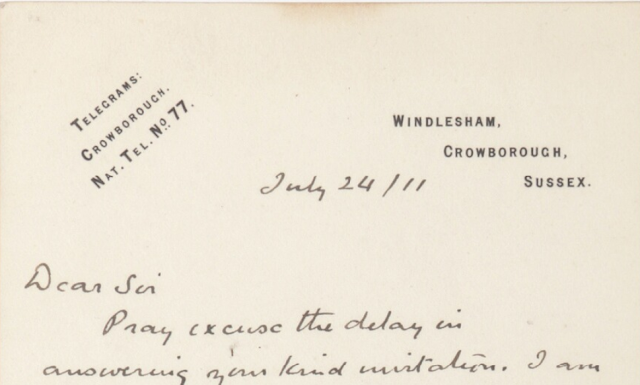 Here's your chance to own an authentic letter from Sir Arthur Conan Doyle. 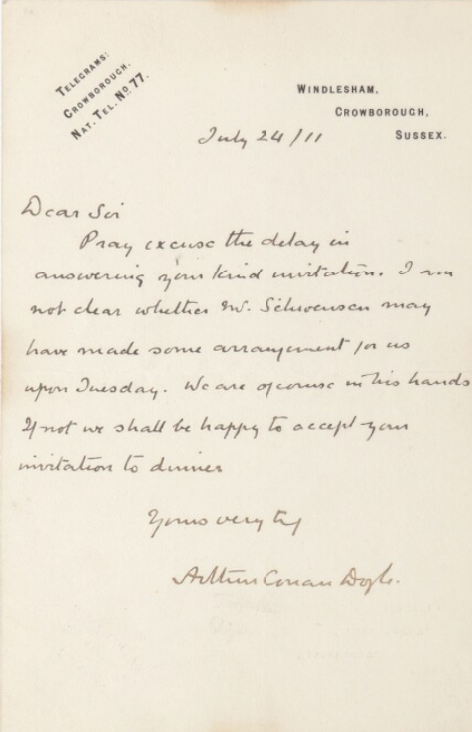 The text of the letter is as follows:


Dear Sir
Pray excuse the delay in answering your kind invitation. I am not clear whether Mr. Schwensen may have made some arrangement for us upon Tuesday. We are of course in his hands. If not we shall be happy to accept your invitation to dinner.
Yours very truly


As with many handwritten items, this comes with a story. According to the site:


The occasion is Doyle's attendance at his brother's wedding on 2 August 1911. His brother, Major John Innes Doyle (1873–1919), was actually married in the Church of Holmen in Copenhagen with the Danish concert singer, Miss Clara Schwensen (1881–1930), daughter of Landowner Reinholdt Schwensen (1829–1917) from Lolland, who is described in the letter as “Mr Schwensen”.

The recipient of the letter is anonymous, but it is most likely the English emissary, Sir William Conyngham Greene (1854–1934), with whom Doyle had dinner with in Copenhagen the day before the wedding. In this way the letter is not only related to the world of Sherlock Holmes in general, but also has a fun historical relevance for especially Danish Sherlockians.

We trust that it will find an equally deserving home.