What to Do with Too Many Sherlock Holmes Books? 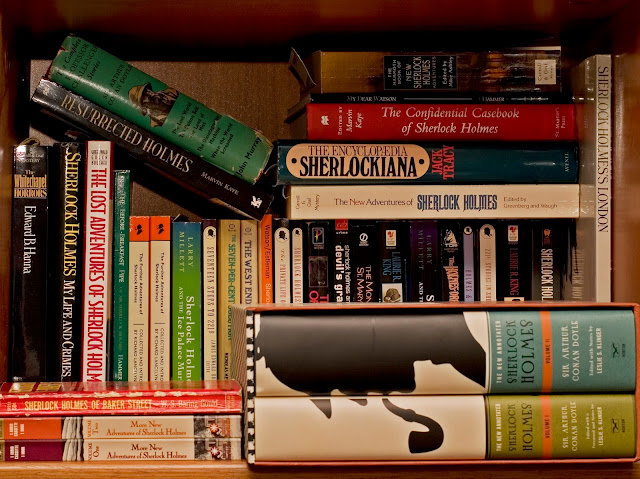 , popped up in my Kindle last night. I've just finished reading a pre-publication copy of a pastiche from a major publisher. This afternoon my e-mail includes a friendly note from the author of a volume just published by MX, the British-based Sherlockian specialists: "I hope you will be able to review my book soon."

I hope the same thing, my friend.

In general I try to review every Sherlockian book I read. I've been doing it for several years now, and there are sixty-some reviews available on my website, Sherlockian.Net.

I don't generally go into the kind of perceptive detail more discriminating reviewers do (check out Leah Guinn's The Well-Read Sherlockian for extraordinary book reviews), but I give a general description and evaluation of each book. It's hard to know whether potential readers find such reviews useful — or find them at all — but I like to think so.

Well, I'm starting to dread this whole process. I've known for a while that I wasn't keeping up with the volume of material, and I've noticed that the top shelf of my 10-foot-wide bookcase, which houses stuff I acquired with every intention of reading it, is getting more tightly packed. Some books have been there quite a while now, including some that I really don't look forward to and others, such as Denis O. Smith's The Mammoth Book of the Lost Chronicles of Sherlock Holmes, that I am really quite excited about. And I know from comments I've seen online that some of these books, notably Zach Dundas's The Great Detective, are seriously important in our field.


But I have to reserve some of my waking hours for family, and baseball, and my health; and for Sherlockian activities that don't involve book reviewing, such as, oh, talking to other Sherlockians online or, when possible, in person; and for books — yes, there are some in the world — that aren't even Sherlockian. Did I mention how far behind I am in watching Sherlockian movies? Nope, haven't seen Ian McKellen yet. Haven't seen Gillette's 1916 wonder. Haven't seen the Petrenko series. Haven't even seen Sherlock Holmes: A Game of Shadows.

Something went click in my head when I ambled into the dealers' area at Scintillation of Scions in Baltimore earlier this summer. There were tables and tables displaying things people wanted me to buy, and they weren't all keychains and candles. Many of them were (and I know this will astonish you) books. The most heavily laden table was that of Maryland's mystery bookstore, Mystery Loves Company, and I'm sure they are fine people performing a valuable community service, but when I saw the dozens of lovely unread books spread across their sales space, with appealing cover illustrations and titles designed to whet the Sherlockian appetite for blood, all I could think was: I am never in my lifetime going to be able to read all this stuff, or even find shelf room for it, and I don't know where I would even start.

I didn't buy any books at Scintillation. I came home to find more books that had chased me down on their own. And I've just checked the web and learned that MX Publishing alone is promising 32 new Sherlockian titles (at least) in 2015. That's not even counting the three-volume anthology, due this fall, that may be the most important, as well as the biggest, pastiche project anybody has ever attempted.

Do you know how many new Sherlockian books were published in 1977? Twelve, total, including a Nate the Great title for beginning readers.

We are in the middle of a boom, a renaissance, a flowering, a flood, an avalanche of books. Some of them are wonderful, some are dumb and tedious, some will be classics, some are cynical attempts to part collectors from their money, some are quietly witty gems, some will change my life if I ever get around to reading them. I just wish I knew which were which.