"a library where Sherlock Holmes was pursuing some laborious researches" [3STU] 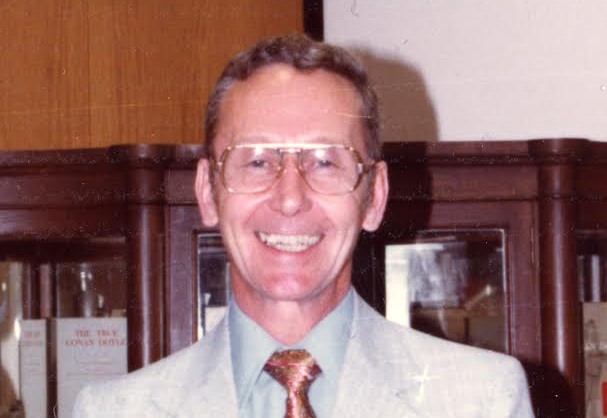 Austin McLean, BSI ("The London Library) died on January 16, 2015. Thus passed one of the most important guardians of the Sherlock Holmes legend whose merits, like those of the Great Detective himself, should be publicly recognized.

Born in 1930, Austin served in the United States Marine Corps and later held positions in a variety of libraries, culminating as Curator of the Special Collections and Rare Books section of the University of Minnesota Libraries for nearly three decades in the 1970s, 1980s and 1990s.

Together with E.W. McDiarmid, BSI ("The Bruce-Partington Plans") and many others associated with the libraries, he was instrumental in establishing Minnesota as a world class center for the study of Sherlock Holmes.

This began with the purchase of the small but select James C. Iraldi collection in 1974 but really gained momentum in 1978 through the donation of the Mary Kahler and Philip Hench collection of Sherlock Holmes and Arthur Conan Doyle materials, including manuscript pages from The Hound of the Baskervilles, unique William Gillette memorabilia, and original artwork by Frederic Dorr Steele. Under Austin’s watch there were many other significant acquisitions, including a Frederic Dorr Steele archive donated by his children; the Edith Meiser collection of radio scripts and recordings along with related material; a large portion of the Vincent Starrett papers; the Howard Haycraft archive; and of course the enormous John Bennett Shaw Sherlock Holmes collection.

During his tenure Austin supervised numerous exhibits and conferences to help publicized these holdings: details of many of them can be found on the Sherlock Holmes portion of the Special Collections and Rare Books web site. These undertakings often resulted in attractive publications, a selection of which are available as PDFs on the web site. All this first created and then sustained the critical mass necessary to attract still more important materials and additional support for the collections.

Austin preferred to keep himself in the background during much of this but it is fair to say that
most of what happened to make Minnesota such an important Sherlock Holmes center would have been impossible without his drive and devotion. Virtually every Holmes-related project undertook by the Libraries benefited from his involvement. All this happened while he oversaw the acquisition and development of many other important collections in different areas, again insuring the University of Minnesota would be an essential stopping ground for many scholarly endeavors. This fine work is now ably carried on by Tim Johnson and many other talented library employees and local enthusiasts.

Austin was invested in the Baker Street Irregulars in 1990 as "The London Library," a suitable acknowledgement of his many contribution towards keeping the memory green, even if most still were not aware of their number and importance. Again like Holmes, Austin would no doubt proclaim, "I do not think I am in need of booming."

But even Sherlock Holmes was wrong on occasion.


Editor's note: Special thanks to Andrew Malec, BSI ("The Strange Old Book Collector") for writing this up, and to Cheryll Fong and Tim Johnson from the Special Collections and Rare Books section of the University of Minnesota Libraries. Tim was our guest on IHOSE Episode 67.