"Some Observations upon the Segregation of the Queen" [LAST] 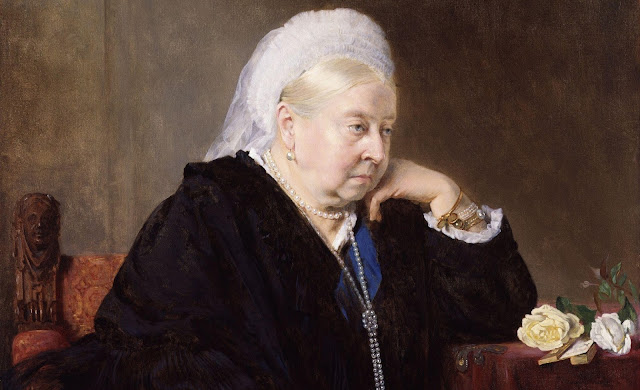 Queen Victoria is still "a certain gracious lady", as Watson calls her in "The Bruce-Partington Plans", but she loses an important historical distinction today. She is no longer the longest-reigning British monarch; Elizabeth II, who has been Queen since February 6, 1952, has now been on the throne for longer.

Victoria reigned for 63 years 216 days (or 23,226 days, as Buckingham Palace prefers to calculate it), from June 1837 to January 1901. Sherlock Holmes "began his adventures in the very heart of the later Victorian era," as Arthur Conan Doyle wrote in the introduction to The Case-Book of Sherlock Holmes

, and Sherlockians are among those who know something of the respect and affection she inspired. Holmes himself felt patriotic sentiments towards the Queen-Empress, with the "VR" for Victoria Regina that he inscribed on Mrs. Hudson's wall in bullet-pocks.

The present Queen is Victoria's great-great-granddaughter, which may seem like a very great gap, but consider this: Winston Churchill, who was Elizabeth's first prime minister, was already a Member of Parliament while Victoria was still on the throne. Christopher Morley, Basil Rathbone, Edith Meiser, Sir Sydney Roberts, Dorothy Sayers, Raymond Massey and Mary Louise Conan Doyle are among people with Sherlockian connections who were alive in both reigns.

Queen Victoria's Golden and Diamond Jubilees (1887 and 1897 respectively) seem to have an attraction for pastiche authors, but the canon itself has only one casual mention, in "The Dancing Men", when Hilton Cubitt "came up to London" for the celebrations. He is not clear which Jubilee that was, but most chronologists seem to favour the latter. Queen Elizabeth marked her Golden Jubilee in 2002 and her Diamond Jubilee in 2012.

In case anyone is wondering who holds third place in the standings, behind Elizabeth and Victoria in length of service on the British throne, that would be George III, who reigned from October 1760 to January 1820. And he certainly figures in the canon, with that memorable line in "The Noble Bachelor" about "the folly of a monarch in far-gone years".

At least nine other British or English monarchs are also mentioned in the Canon: William I, William II, Edward I, James I, Charles I, Charles II, Anne, George II, and George IV. We have a prize from the I Hear of Sherlock Everywhere Grab-Bag of Gifts (IHOSE GBG) for anyone who can name the stories in which these nine monarchs appear. Leave your answer in the form of a comment below, on our Facebook page, or tweet us (@ihearofsherlock) with the hashtag #9monarchs and use the Jay Finley Christ abbreviations for the story names.

Good luck and God save the Queen!