"They are not very hard to deceive" [LAST] 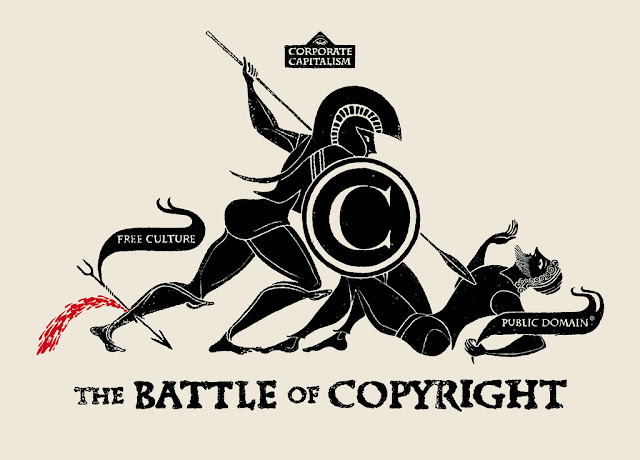 Much has already been written about Andrea Plunket (see Sherlockian.net), the woman who claims that she holds the rights to the name Sherlock Holmes and the stories, and who repeatedly has been told in court that she doesn't. But it is one thing to claim something, and it is another to have people actually buying licenses from you - as the Conan Doyle Estate found out last year.

It is true that Plunket has registered a number of trademarks concerning Sherlock Holmes, but strong doubts remain that these trademarks can be used to demand license payments from publishers when they want to publish Sherlock Holmes pastiches. However, many have accepted her trademark claims and believed that she is the copyright holder of Sherlock Holmes, and among them are some major book publishers, e.g. Penguin Books, Simon & Schuster and Oxford University Press.

The Case of the Confused Copyright starts in the 1950s with Sheldon Reynolds, an American TV producer who was contacted by Sir Arthur Conan Doyle's sons, Adrian and Denis, and after Denis' persuasive dinners in Paris, Reynolds agreed on buying a license for the Sherlock Holmes TV rights, and thereafter made a TV series in 1954 with Ronald Howard playing the great detective.

We move on to the mid 1970s. Sheldon Reynolds was thinking about making a new Sherlock Holmes TV series and for that reason he contacted the copyright holder. At that time the copyright holder had for a few years been the Baskervilles Investments Ltd, which was owned by Princess Nina Mdivani Conan Doyle Harwood. She had been married to Denis Conan Doyle, who died in 1955, and then remarried his secretary (who was not really his secretary, but rather Nina's protégé) Tony Harwood. She was definitely not a princess, but she had claimed to be that all since the 1920s (along with her siblings, all of them "princesses" and "princes" who had fled from Georgia). The fascinating story of "the Marrying Mdivanis," who became famous for marrying the richest and most famous of heiresses and film stars, is unfortunately beyond the focus of this article.

Reynolds contacted the Baskervilles Investments Ltd, only to find out that the company was held by a receiver, Mr William G. Mackey, appointed by the Royal Bank of Scotland. And Mr Mackey wanted to sell the complete Conan Doyle literary estate. So Sheldon Reynolds didn't walk away from the meeting with just a license to make a new TV series, but he decided to buy the whole estate. However, he didn't have any money. But his wife Andrea had. Or rather her mother, who had inherited a fortune from her late husband, an heir of Pfizer chemicals.

For the next few years, Sheldon and Andrea Reynolds - together with her parents - ruled over the Sherlock Holmes copyright, until it ran out, fifty years after the death of Sir Arthur Conan Doyle. A new copyright act had by then come into use in the US, which made it possible for Conan Doyle's only surviving child, Dame Jean Conan Doyle, to get the copyright back for some stories that were still in US copyright. 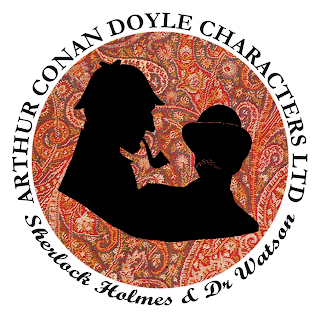 And this is where it starts to get complicated. Andrea Reynolds, who nowadays is remarried as Andrea Plunket, says that a number of juridical errors were made when forcing her to give away the remaining copyright to Dame Jean. In the late 1990s, after the death of Dame Jean, Andrea Plunket started to sue companies who used Sherlock Holmes without paying her. She always lost in court. But that didn't keep her from continuing to run something that she called the Sir Arthur Conan Doyle Literary Estate and claim on her web page:

The web page is now under re-construction, so this text is from the old web page. It's a mix of trademark and copyright claims.

The trademark business is a complicated one, and it is difficult to completely protect a name like Sherlock Holmes with a trademark. A blog post from the World Trademark Review tells more about the Plunket trademark case and her company Arthur Conan Doyle Characters Ltd.

The Conan Doyle Estate Ltd - whom you may remember from its recent legal battle with Leslie Klinger, BSI ("The Abbey Grange") - warns people about Andrea Plunket on its web page. One of its issues is that so many publishers accept Andrea Plunket's copyright claims at face value and believe that they are buying a legitimate license from her, often through her British agent Jonathan Clowes Ltd. It is not far-fetched to believe, thanks to the evidence presented, that a license from Plunket is totally worthless.

I have no insight at all into the money being paid, but I can clearly see that Jonathan Clowes and Andrea Plunket are mentioned on the copyright pages or in the acknowledgements of many books. And it's probably a good guess that money has been involved, since that is the aim of their business. We should also remember that outside the U.S., money never has to be paid for a license to write about Sherlock Holmes or to publish Conan Doyle's stories. There is no trademark or copyright stopping that. In the U.S., the situation was previously rather more complicated, until recently when Leslie Klinger succeeded in his lawsuit against the Conan Doyle Estate Ltd. - with a few exceptions - couldn't force publishers to pay a license to publish Sherlock Holmes pastiches.

"a question which has puzzled many an expert" [STUD]

So which authors and publishers have believed in Andrea Plunket's copyright and trademark claim? A quick search through Google Books gives an interesting list.

It's not surprising to find some self-published books on such a list. The author pseudonym Radkris, who has written The Adventure of Black Drop, published by AuthorHouse in 2011, mentions that the characters are used with permission from Clowes and Plunket - and actually also from Jon Lellenberg at the Conan Doyle Estate Ltd. 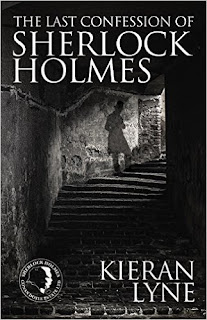 In 2012, the British independent publisher Robert Hale published Sherlock Holmes and the Queen of Diamonds by Steve Hayes and David Whitehead. Holmes and Watson are used with the kind permission of Clowes/Plunket. That is also the case in the Hale book Sherlock Holmes at the Breakfast Table by L. F. E. Coombs (2013).

It is a surprise to find Oxford University Press among the publishers who have accepted Andrea Plunket as the copyright holder - and has done so twice! In 2000 they published The Book of Heaven: An Anthology of Writings from Ancient to Modern Times, edited by Carol Zaleski and Philip Zaleski. Among the texts is an excerpt from Conan Doyle's The Land of Mist. Reprinted by kind permission of Jonathan Clowes Ltd., London, on behalf of Andrea Plunket, Administrator of the Sir Arthur Conan Doyle Copyrights.

In the same year, 2000, Oxford University Press published The Oxford Book of Detective Stories, edited by Patricia Craig. "The Blue Carbuncle" was included and again with a permission from Clowes and Plunket. 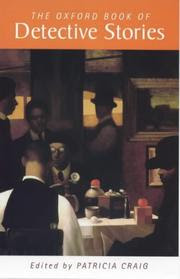 I find it a little bit sad to find such a great author as Robert Ryan on the list. His Dead Man's Land is a really good Doctor Watson story. In the Acknowledgements he writes:


"Very early in our discussions about writing a WWI historical thriller, my editor, Maxine Hitchcock, came up with the idea of a detective in the trenches, and had the patience and tenacity to wait until I had worked out it had to be a doctor and a famous one at that. David Miller, my clear-headed agent, then pointed out that Dr Watson has been trademarked by the Conan Doyle Estate. So thanks to him and to Olivia Guest of Jonathan Clowes, which administers the estate. She listened while I pitched the idea over the telephone, and supported its progress through to permission being granted."

A permission that, as we have seen, was rather worthless. The book was published by Simon & Schuster in 2013. On one of the first pages of the book, there is a "Note from the author" telling about the permission Ryan has been given to use the character Doctor Watson. 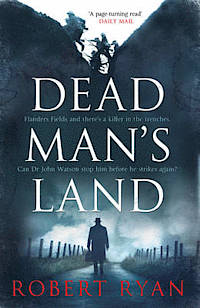 In a preface for The Complete Works of Sherlock Holmes by Sir Arthur Conan Doyle, published in 2013 by Simon & Schuster, Robert Ryan wrote more about the process of getting the permission:


"And so we started on the road to Dead Man's Land, the story of the good doctor's adventures in World War One. But there was one fly in this petroleum jelly ointment, in that Dr Watson has been trademarked by the Conan Doyle Estate, along with Holmes, Moriarty and Professor Challenger (although the tales themselves are all technically out of copyright in this country). So it seemed worthwhile getting the Conan Doyle Estate's blessing. I contacted Olivia Guest at Jonathan Clowes Agency (which represents the ACD estate), who asks me to pitch the story (at that point rather sketchy) over the telephone. She liked the concept enough to take it to Andrea Plunket who rejoices in the title Administrator of the Conan Doyle Copyrights and Director of the EU Trademarks. After a few tense weeks I received a green light."

The list of authors and publishers who have paid money to Clowes/Plunket is probably much longer. These are just the examples I have found at Google Books.


But maybe the most exceptional book to be found on the list is The Adventures of Sherlock Holmes, published by Penguin Books in 2011 (a reprint of the 1981 edition). In the book the following text is found:


This text is not found in the 1981 edition. Penguin, with their long history of Conan Doyle books, should not make such a mistake. And they should indeed know that there is no copyright protection of The Adventures of Sherlock Holmes, wherever in the world they wish to publish it. And that is a minor scandal. 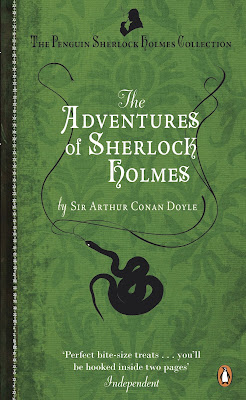 (Thanks to my Twitter friends @jankathecat and @raywilcockson for research help!)